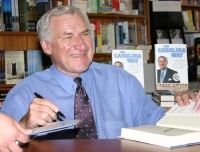 ©Robert Goldberg, Jr. Dean Smith made a huge impact on basketball in his 36 years of coaching. As a coach at the University of North Carolina Dean Smith won 879 games. See more pictures of basketball.

Dean Smith learned from the best and became the best. A protégé of University of Kansas coach Phog Allen, who won 746 games, Smith has done his mentor a few better in his 36 years of coaching, winning 879 at the University of North Carolina, which is second best behind Bob Knight.

Among Smith's innovations were the four-corners offense, the run-and-jump defense, the use of multiple screens against zones, and team huddles before free throws to set up defenses. His teams annually ranked among the best shooting and least turnover prone in the nation, and many of his former pupils have become successful coaches, including Billy Cunningham, Larry Brown, George Karl, Roy Williams, and Eddie Fogler. Smith had a stranglehold on records such as most 25-win seasons (22) and most consecutive NCAA Tournament appearances (23).

Born February 28, 1931, in Emporia, Kansas, Smith played basketball, football, and baseball in both high school and college. He was a reserve guard on Allen-coached Kansas teams that won the NCAA championship in 1952 and finished second in 1953. Smith began his coaching career while serving in the Air Force, then went to North Carolina as an assistant in 1958. He took over as head man in 1961 after Frank McGuire left to coach the Philadelphia Warriors.

Smith's first few teams were nothing special, as rabid Carolina fans were quick to point out. Students hanged Smith in effigy after one loss in 1965, but two years later the Tar Heels began a streak of three consecutive appearances in the Final Four. Meanwhile, Smith integrated the program, recruiting Charlie Scott, the first African-American scholarship athlete at the university.

Smith won his first national championship in 1982, beating Georgetown University on a last-gasp basket by Michael Jordan, and added a second in 1993 with a victory against the University of Michigan's "Fab Five." He coached the U.S. team to a gold medal at the 1976 Summer Olympics in Montreal, and he placed at least one Carolina player on each Olympic team from 1964-92. He was elected to the Hall of Fame in 1982. He retired from the game in 1997.

In 2006, Smith was recognized for his impact on college basketball by being inducted into the founding class of the National Collegiate Basketball Hall of Fame. He was elected along with Oscar Robertson, Bill Russell, John Wooden, and James Naismith.