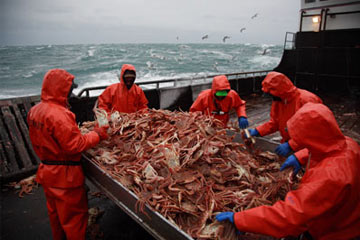 Crab sorting is such a quiet time.
Discovery Channel

Once onboard, the camera team pretty much assumes the schedule of the fishing crew. If this means shooting for 24 hours in a row, so be it. The cameras rigged in and around the boats run almost constantly, capturing everything that happens from a variety of angles. There are no midnight tape exchanges from the boat to the editing team either. So once a tape is shot it's moved to a safe place and kept there until the boat is back at Dutch Harbor. This leaves the show's editors with a quick turnaround time once they get their hands on the massive amount of footage. The copious notes kept by the camera teams are key in making sure none of the best shots and interviews are overlooked.

Back home, the show's producers draw up a rough template for the season based on the daily phone calls from ship to shore. There's also a camera team that stays with the Coast Guard team in case of an accident. One minor accident occurred when a cameraman stepped backward and fell into a crab dump hole. He cracked some ribs but managed to go on with the shoot. To add insult to injury, per fishing tradition, he was forced to pony up beer for the crew for falling into the crab tank.

The captains and crew generally seem happy with their newfound fame. They all maintain that they're fishermen first and TV personalities second. They also think that it's shed some light on a tough job and that they've gained more respect, in general. Several of the boats have their own Web sites with areas for fans to ask questions, look at pictures and, of course, buy some merchandise. (I mean, who doesn't need a Cornelia Marie hoodie?) The Hanson family even developed and released a video game for Xbox 360 and PC in June 2008 called "Deadliest Catch: Alaskan Storm" that puts the gamer in the captain's chair. As for the rest of the fleet from Dutch Harbor, there was some occasional grumbling about the captains on "Deadliest Catch," but the production team believes most of them secretly wanted to be on the show themselves.

For more information on the ocean and the adventures you may find there, feel free to fish through the captivating selection of links on the following page.

So You Better Treat Them Right

The crews of these boats make a nice amount of cash for their efforts. The deck traditionally gets 30 percent with the other 70 going to the boat. For example: for a $500,000 season, which is close to average, the deck splits $150,000 among five men for $30,000 each -- plus all the Beanie Weenies, Hot Pockets and coffee they desire. Two month-long seasons a year put them at $60,000 on average, though some deckhands have raked in up to $100,000 in big years.

Captains take the lion's share, but absorb the expense of running the boat -- bait, insurance, maintenance, fuel, and food and drink for the crew. It costs about $50,000 to fill up the Time Bandit with fuel, which ideally lasts the entire season. Another $80,000 goes toward insurance and permits. All in all, a $500,000 run yields about $230,000 for the boat [source: "Deadliest Catch"].