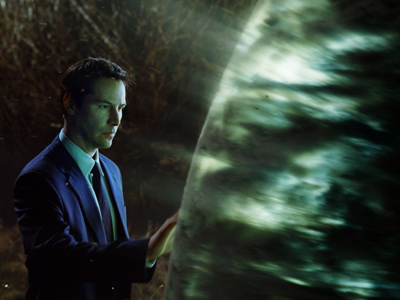 Keanu Reeves worked with a green screen and his imagination to film a lot of his scenes.
Photo courtesy of Doane Gregory/Twentieth Century Fox Corporation

­"The biggest logistical challenge of this movie was shooting in Vancouver when it's set in New York," comments Derrickson, noting that the Canadian climate didn't help. "There were nights that were certainly freezing. Some of the exterior McDonald's shots got snowed out. It snowed for the first time that year when we were shooting those exteriors. We had to stop."

Another location had to be scrapped entirely. "We had a real location that I loved for the scene where Klaatu goes out on the water and activates the spheres, but the lake froze so we had to scrap the location and build the set."

A practical 9-foot tall version of a sphere, an illuminated Plexiglas ball, was built for that scene, but the actors had to use their imaginations for the giant sphere, and Okun did as much as he could to help them. "For actors who are stuck acting to blank walls and a bank of lights, we wanted it to seem real," he explains. "I spent a lot of time with them going through what it was, why it was and what it would feel like, and they were very open to receiving the information."

­A second unit and visual effects crew went to New York to gather footage that could be composited into the movie in post-production. "There's a lot of real New York in the movie," points out Derrickson, noting that the shots of empty Manhattan streets "were taken at the crack of dawn at 5:30 in the morning. As soon as there's enough light, you roll."

In keeping with the save-the-Earth theme of the movie, the production was "green" as well. The makers employed bio-diesel fuel for generators, hybrid vehicles and eliminated the use of paper wherever possible. For Derrickson, that meant adjusting to digital storyboards. "There was no notebook to carry around, and that became confusing," he says.

Now that the film is finished, he's satisfied with the movie and the ideas it represents. While he didn't set out to make a message movie, he hopes the ending will make audiences think. "The messes that we've gotten ourselves into as Americans and a species and a human race -- the solutions to these will come at a price and we have to be willing to pay that price," Derrickson says. "I like the idea of putting it out there for people to decide what that price is and what the consequences would be."