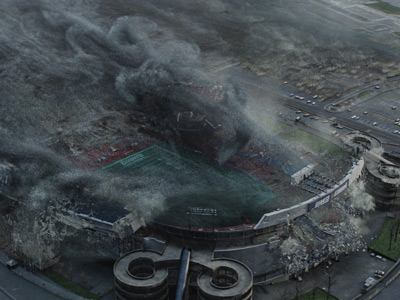 ­The original "The Day the Earth Stood Still" set the standard for cinematic spa­cecraft with a big, metallic flying saucer that evolved into the Millennium Falcon of "Star Wars" and every spaceship we've seen since. Scott Derrickson threw that idea out the window. "I loved the idea of an alien technology that came from a completely different tradition, the idea that this was a species that had developed a technology that was essentially more ecologically and biologically based," he says. Translating that theory to reality wasn't easy.

While Derrickson liked the idea of a giant sphere, not as a typical transportation mode but as a portal, getting it to work as an art concept and then a moving entity was difficult. "The tough thing was getting them to look like they had this atmosphere -- there's sort of a gas planet feel to them. But if you go too far one way, it's too much like a gas planet, and too far the other way, and it just feels like clouds."

Having worked on the 1998 sci-fi movie "Sphere," Okun was all too familiar with the problems associated with the shape. "A sphere is the worst shape to deal with because spheres have no perspective to them, no scale to them and nobody has any experience standing next to anything that shape that's 300 feet tall," he points out. Issues of distance and perspective came into play, and he was constantly reminding his colleagues to allow for the fact that an object that size would have a 150-foot overhang in every direction.

Although the sequence beginning with the sphere landing in Central Park challenged Derrickson most, Okun says the shot of the nano-bug swarm devouring a truck was the single most difficult to render. "We did 1,156 versions of it," he sighs. Demolishing Giants Stadium was almost as tricky. Helicopter cams shot aerial footage on location, but the rest of the destruction was entirely CG. "These things eat layer by layer, they don't consume it whole," he explains. "The level of complexity multiplies by a billion, because once you eat away at a wall you're exposing what's in the wall and the back of another wall and another structure, so it became very complex."

Before Klaatu adopts human physical characteristics so he can interact on Earth, he's seen briefly in alien form. "We came up with a CG creature essentially made up of light that becomes a guy in a bio-suit," a sort of gray skin incubator, says Okun. On set, special effects makeup designer Todd Masters and his team created a prosthetic alien suit using a mixture of thermal plastic and silicone. "It's really sticky and smells awful," comments Okun.

Designing Klaatu's giant companion -- and instrument of destruction -- GORT was an exercise in trial and error, "the first thing we started working on and the last thing we finished," Okun notes. At first, efforts were made to depart from the look of the humanoid robot in the original film. "So we spent a lot of time designing fantastic alien monster creature things that got increasingly ridiculous," says Derrickson, who remembers thinking some versions "looked like they should be in a park as a piece of modern art." The concept eventually came full circle. "We realized we needed to make it look and feel like the original, but have the impact, scale and magnitude that a modern audience would find satisfying."

­According to Derrickson, the DVD release will include an extra demonstrating "some of the bad ideas we had for GORT, to show that sometimes we figure it out for ourselves that we're being stupid."