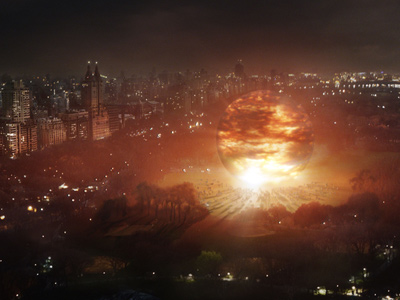 WETA, based in New Zealand, completed the majority of the special effects for the movie.
Photo courtesy of WETA

­Months of research, development and discussion went into the design of the main effects elements in the movie: the spaceship, alien Klaatu and the robot GORT (Genetically Organized Robot Technology). "I wanted to have those things as the key signature sci-fi elements in the movie, but I wanted them to feel like nothing we had here on Earth and wanted them to have some relationship to each other. It was a tough call," concedes Scott Derrickson.

He also set the parameter that the effects not detract from the story "and be done in a realistic, organic way," adds Jeff Okun, who met with future-scientists at NASA's Jet Propulsion Laboratory and elsewhere in an effort to "base the movie in some sort of reality." Pointing out that "Star Trek's" communicators now seem ho-hum to the smart-phone generation, he aimed to include "stuff that doesn't exist now but in 50 years it will," plus technology that's right around the corner.

Okun and his team visited Microsoft in Seattle and were shown an interactive touch-screen table called Surface that's already being used at Sheraton hotels and by media organizations (MSNBC used in its election coverage), and that they worked it into the movie.

Inspired by the "beautiful, eloquent, and organic" visual effects Dennis Muren created for "A.I.," Okun also approached "TDTESS" with "a sense of responsibility to build a world that we'd like to live in." He met with Derrickson, director of photography David Tattersall, production designer David Brisbin and producers often to strategize and figure out costs.

Eight visual effects houses shared the load, though WETA in New Zealand did the bulk of the work. Of the 507 visual effects shots in the movie, WETA did 227 of them, including the giant spheres, alien, destruction sequences and robot GORT.

Other vendors like Cinesite and Flash Filmworks supplied composites, sky replacement, wire removal, set extensions, crowd replications and burn-ins -- anything the characters see on monitor screens. Okun spent three and a half months working with computer artists at WETA to streamline the process.

­Many of the movie's sequences were shot against a green screen so matte paintings and footage of actual location backgrounds could be added later. This was necessary in part because the story is set in New York City but was shot in Vancouver, Canada. "Everything we shot in Central Park is green screen with the exception of a few sh­ots when the sphere is landing and there's a crowd there. We shot that in a park in Vancouver and dropped New York City in behind so we could get the scale and scope," says Okun, adding that most car driving scenes are green screen as well.

­Of course, that 300-foot tall sphere is entirely CG, and creating it proved to be one of the biggest challenges for the filmmakers.

"Klaatu barada nikto" is probably the most memorable line in the original "The Day the Earth Stood Still," but it's not a crucial part of the remake. The story no longer hinges on saying it, but director Scott Derrickson didn't want to eliminate it entirely. If you listen closely -- or in the future, pause the DVD -- it's there, he assures. "When Klaatu touches the sphere and triggers the blast, you can hear it there."