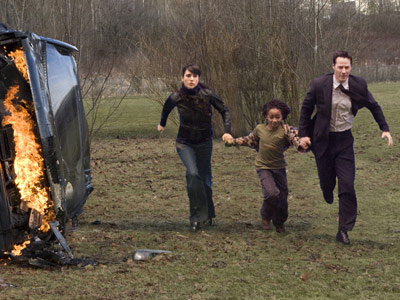 When "The Day the Earth Stood Still" invaded movie theaters 57 years ago, America was in the midst of the Cold War and paranoid about the Red Menace and the ­atomic bomb. Filmed in black and white, the Michael Rennie-Patricia Neal movie had primitive effects by today's standards. But it made some salient points about man's mistreatment of fellow man and planet Earth. Those themes are preserved, wrapped up in a spectacular visual effects-driven package in the new version starring Keanu Reeves and Jennifer Connelly, with Kathy Bates, Jon Cleese, Jon Hamm and Jaden Smith (son of Will Smith and Jada Pinkett-Smith) in supporting roles.

"I loved the idea of being able to tell basically the same story but bring in the social issues that we have now, the interesting messes that we've gotten ourselves into now around the world," says director Scott Derrickson ("The Exorcism of Emily Rose"). A big fan of the original Robert Wise-directed film, Derrickson signed on in May 2007, when the screenplay was a work-in-progress -- before Keanu Reeves was attached and 20th Century Fox officially green-lit the movie. Derrickson spent several months planning and conceptualizing how he was going to preserve yet modernize the story.

"You'd better have a good reason to remake a classic film," he acknowledges. "But there's value in telling this story to a movie-going population who for the most part won't have seen the original and won't know that story. My approach was to try to respect the fan base and that it is a sacred movie to a lot of people."

­No stranger to sci-fi cinema, Reeves says he was drawn to the "worthwhile story" and a chance to play an alien. Connelly was drawn to playing the astrobiologist who finds herself in the midst of a life-altering and world-shattering crisis. "She's strong, she's bright, she's a mother, she's fearless and I like that about her," says the actress, whose scientist colleague is played by Jon Hamm, star of cable hit "Mad Men." Coming aboard late in the game after wrapping season one of the series, Hamm "got off a plane, got fitted, and went onto the set, which was a little bit nerve-wracking," he admits. "But the opportunity to be involved in something like this is amazing for me," he says.

­Fortunately for Derrickson, he had considerably more time to prepare to shoot the visually complicated film, something he considers crucial. "Sometimes you don't have it, and that can be the death of these kinds of movies," believes the director, who worked closely with visual effects supervisor Jeff Okun ("Fantastic Four," "Blood Diamond") to develop the CG sequences in the movie, as we'll detail next. ­ //]]]]> ]]>