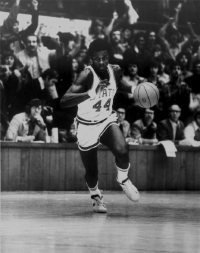 Drugs and alcohol were the only opponents to stop David Thompson. Renowned for his extraordinary leaping ability and uncanny shooting, "Skywalker" soared above basketball's landscape in the 1970s and early 1980s before falling victim to cocaine abuse and slipping from the game. "I had a chance to be the greatest basketball player ever and I blew it because of drugs," Thompson later reflected. "It's that simple."

At North Carolina State University in 1974, the 6'4" Thompson was largely responsible for ending UCLA's seven-year reign as NCAA champion. As a pro with the Denver Nuggets and Seattle SuperSonics, David Thompson averaged 22.7 points, won All-Star Game MVP Awards in the American Basketball Association and in the NBA, and once scored 73 points in an NBA game.

One of 11 children, Thompson was born July 13, 1954, in Shelby, North Carolina. After enrolling in college in 1971, he averaged 27.4 points a game his sophomore season, leading N.C. State to a 27-0 record (the Wolfpack couldn't play in the NCAA Tournament because of probation). The next year, Thompson and mates ended UCLA's dominance with a double-overtime victory against Bill Walton's Bruins in the NCAA semifinals. The Wolfpack then downed Marquette University for the national championship. Thompson earned national Player of the Year honors as a junior and senior.

As a rookie with the ABA Nuggets in 1975-76, Thompson averaged 26.0 points a game and was runner-up to Julius Erving in the inaugural Slam Dunk competition. The next year, the Nuggets joined the NBA and Thompson averaged 25.9 points a game. Later, he signed a contract making him the highest-paid athlete in professional sports. But by his last year in Denver, Thompson, now immersed in drug use, had lost his starting job. Traded to Seattle in 1982, he made a half-hearted attempt at rehabilitation, then saw his career ended for good in 1984 because of a knee injury suffered while tumbling down a flight of stairs during a fist fight at New York's Studio 54 nightclub.

In recent years, Thompson has done work for programs that help disadvantaged children. He was elected to the Hall of Fame in 1996.