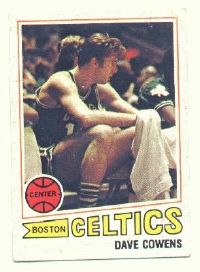 At one point, Dave Cowens had a personal 10-game winning streak against Kareem Abdul-Jabbar. See more pictures of basketball.

Dave Cowens, according to longtime Boston sports writer Bob Ryan, is one of four pivotal players in Celtics history -- the other three being Bob Cousy, Bill Russell, and Larry Bird. Cowens bridged the gap between the Russell and Bird eras, spurred the Celtics to championships in 1974 and 1976, and became the second-leading rebounder in franchise history.

There was nothing subtle about Cowens. He banged, fought, bullied, and willed his way into the upper echelon of NBA centers despite standing 6'9" in an era of seven-footers. He was the cornerstone of Boston's defense and set the tone with his hustle and tenacity. The left-hander had a few flaws, though. He never developed his right hand, and he wasn't very smooth in the low post. He fouled out 90 times in his career and committed nearly 3,000 fouls. But he had a soft jump shot, a reliable hook, springy legs, and superb timing for rebounds. He never led the NBA in rebounding, but he finished second or third five times.

Cowens's ability to run the floor and operate on the perimeter made him a tough opponent for giants such as Wilt Chamberlain and Kareem Abdul-Jabbar. In the 1972-73 season, the Celtics went undefeated against Chamberlain's Los Angeles Lakers, with Cowens averaging 31 points and 19 rebounds. At one point, Cowens had a personal 10-game winning streak against Abdul-Jabbar.

Born October 25, 1948, in Newport, Kentucky, Cowens attended Florida State before joining the Celtics in 1970. That year he shared the NBA Rookie of the Year Award with Geoff Petrie of the Portland Trail Blazers, and two seasons later he won the Most Valuable Player Award with averages of 20.5 points and 16.2 rebounds. In 1976-77, Cowens said he lost enthusiasm for the game and took two months off; at the time, the Celtics were in steep decline. Cowens doubled as player/coach for most of the 1978-79 season after Tom Sanders was fired, but the Celtics finished in last place. A year later, Cowens retired. He attempted a comeback with the Milwaukee Bucks in 1982, played 40 games, then quit for good. He was elected to the Hall of Fame in 1990.