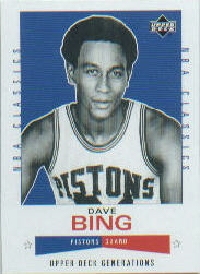 Dave Bing was one of the first players to blend athletic ability with textbook basketball skills. See more pictures of basketball.

Dave Bing might be the most underappreciated star in NBA history. A wiry 6'3" guard with the Detroit Pistons from 1966-75, and later with the Washington Bullets and Boston Celtics, Bing was one of the first players to blend explosive athletic ability with textbook basketball skills. Whether gliding to the basket for layups or stroking stop-on-a-dime jump shots, he did everything smoothly, under control. If few people noticed, it was because Bing played in blue-collar Motown, in the days when the Pistons worked downtown at Cobo Arena and never won a championship. But basketball people knew who he was; they elected him to the Hall of Fame in 1989.

Born November 24, 1943, in Washington, D.C., Bing learned teamwork at an early age. He was the best basketball player at Spingarn High School, yet during his senior season six of his teammates averaged in double figures. At Syracuse University, he set a school scoring record (1,883 points in 76 games for a 24.8 average) and led the Orangemen to their first NCAA Tournament berth in a decade. He went to the Pistons as the second pick in the 1966 NBA draft.

Bing's professional career was marked by scoring outbursts, deft playmaking, and a succession of postseason disappointments. His career high was 54 points, and he led the Pistons in assists for nine consecutive seasons. After winning the NBA Rookie of the Year Award in 1967, he led the league in scoring (27.1) the following season. In the playoffs that year, he scored 37 points in the second half of Game 6 against the Boston Celtics, but the Pistons lost the series. In Bing's 12-year career, his teams never advanced past the second round of the playoffs.

Bing had fuzzy vision in his left eye, the result of a childhood accident, and in 1971 his career nearly was ended because of another eye injury, a detached retina. He was traded to Washington in 1975, stayed two seasons, then finished his career in Boston before retiring to business and civic ventures in 1978.