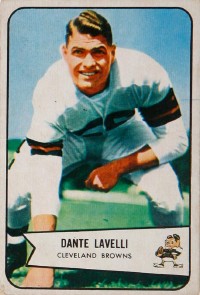 Dante Lavelli was called "Gluefingers" for his uncanny ability to hang onto a football, but it wasn't adhesive that fastened him to the Hall of Fame. His hands were not sticky but strong.

Cleveland coach Paul Brown said Lavelli had the strongest hands of any receiver he'd ever seen. Those hands helped him be one of the great clutch receivers in pro football history.

Nevertheless, the odds seemed stacked against the 6'0", 199-pound Lavelli (born 1923) when he arrived at the first Cleveland Browns training camp in 1946.

Coach Brown had assembled a strong squad for the team's first year in the newly formed All-America Football Conference.

Lavelli had played only three games as a sophomore at Ohio State before entering military service, and there were four experienced receivers ahead of him. But they didn't have his hands.

Lavelli not only opened the season as a starting end for the Browns, but he went on to be named All-AAFC in his first two seasons.

He ran precise patterns, making him a perfect match for quarterback Otto Graham's pinpoint passing. But, if a play broke down, Lavelli was also adept at improvising to get open.

During his first seven years, Lavelli and Mac Speedie gave Cleveland perhaps the best pair of receivers any team had ever enjoyed to that point.

Speedie was the more spectacular of the two and received more honors than Lavelli. But after Speedie defected to Canada, Gluefingers earned new appreciation. He was twice All-NFL and started three Pro Bowls.

Over 11 seasons, Lavelli caught 386 passes, and he was always at his best in big games. In 1950, when the Browns joined the NFL, they were matched in their opening game against the NFL champion Philadelphia Eagles.

Experts predicted the upstart Browns would be no match for the champs. Instead, Lavelli and Speedie destroyed the Eagles with button-hook passes as Cleveland won 35-10.