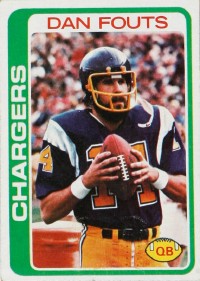 If ever there was a player destined to be an NFL quarterback, it had to be Dan Fouts.

From an early age, Fouts, a San Francisco native, seemed to be in the right spot at the right time. His father, Bob Fouts, was the play-by-play radio announcer for the hometown 49ers and, as such, pulled a few strings to get his son a job as the team ball boy.

After Dan led his St. Ignatius Prep football team to a city championship, he went to the University of Oregon, where they ran a pro-type offense. There, he set school records with 5,995 career passing yards and 37 touchdowns.

The San Diego Chargers made Fouts (born 1951) a third-round draft pick in 1973. As a rookie, he was a backup to his "idol," Johnny Unitas. Fouts replaced the battered veteran in the fourth game of the 1973 season. Dan was never out of the starting lineup again.

Although Fouts' play improved each of his first three seasons, the team did not. Then in 1976, the Chargers named Bill Walsh offensive coordinator, and Fouts' career really began to blossom. His good fortune continued when, in 1978, Don Coryell signed on as the team's new head coach.

Coryell implemented a high-powered, pass-oriented offense, and from then on it was "bombs away. Fouts directed the offensive assault dubbed "Air Coryell."

With Fouts at the controls, Air Coryell transformed the Chargers from also-rans to AFC Western Division champs in 1979, 1980, and 1981. Named both NFL and AFC Player of the Year in 1979, he led the conference in passing and broke Joe Namath's record for passing yards gained in a season (4,082).