The Future of Creature Effects Makeup 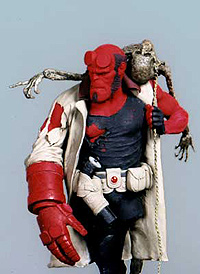 HSW: Where do you see special-effects makeup ten years from now?

Matt Rose: I kind of think it's gonna be in the same spot. It's been kind of the same since I've been doing it -- just things have gotten more daring or bigger -- definitely bigger. There's more people coming into the business that are much more talented and I'm hoping that there's [others] like [directors] Guillermo [del Toro] and Peter Jackson who embrace the idea of working together with digital ... I'm the same as Chad, I enjoy watching a movie where I can tell there's something physically there. And, at the same time I like seeing great digital work too.

HSW: How has CGI affected your industry? Is it killing the industry?

Chad Waters: Some people say that, and it's true, at one point when Jurassic Park came out, I don't know how many years ago that was now -- but, people were saying, "We're done, pack your bags." That was the attitude. But it's been at least 10 years since that happened, and like Matt said, back then if you were to have said, "Well, what's the future of makeup gonna be like in 10 years?", you would say "It's probably not going to exist." But it does. "HellBoy," for instance, is one of the coolest things we've done before or worked on in 10 years. So 10 years from now, like Matt said, it could be the same kind of situation ...