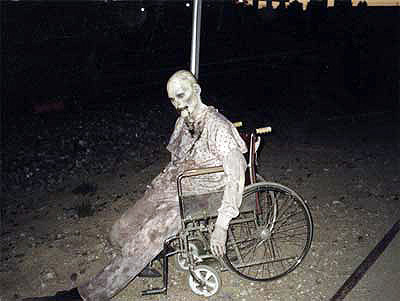 HSW: What are some tricks or techniques for construction and application that you've learned during your career?

Chad Waters: When I got into the business I was expecting everything to be already spelled out -- we use this for this, that for that. But when you get in there, you really are just using anything that would possibly work. I mean it is funny to think of Eddie Murphy [in "The Nutty Professor"] ... under his body suit, at one point, he had this network of many different sized water balloons that were strategically placed to jiggle at the right spot. But they're literally water balloons that you buy anywhere -- but walking into that you'd expect ... they would have made every balloon from scratch or something like that -- but really it comes down to using whatever is available -- whatever will work best.

Matt Rose: And we ended up abandoning the water balloon suit partially because during a makeup test, its breast exploded (laughing). So, we'll limit that a little bit. We can't have his [Murphy's character] whole body blowing up all over the place.

HSW: It seems like full body suits could be rather uncomfortable for an actor to wear. Are they?

Chad Waters: It's really hot. It's really uncomfortable. That's another technique we've all been working on -- making lighter-weight suits that are a little more breathable that look big. And that's an [incredible undertaking] itself because its usually custom carved and we sell them. We used to use things called cooling suits that would pump cool water in a series of networks of tubing ... but that became almost more of a shock to the body because you go from really hot to really cold. So a lot of actors decided they didn't want to use that [anymore].

Matt Rose: For our gorilla suit [for the movie "Mighty Joe Young"] -- John Alexander played Mighty Joe Young - he [John] found that that thing to do, 'cause he was wearing not only a body suit to replicate the gorilla's muscle anatomy, he also then had a full-hair suit on top of it -- that's hair, that's fur, its really hot -- he found the best thing to do between takes was to stuff a vacuum cleaner hose down into the suit and actually suck the hot air out of the suit, instead of pumping air into it. He just liked pulling the hot air out -- that would work for him, so that is always an evolving kind of thing.

And, also it comes down to the person - Ron [Perlman] in "Hellboy" ended up just wearing this motorcycle -- I'm not even sure what it is, one of the people in the shop suggested [it] - they ride motorcycles - and I guess there's some kind of an under suit, which is basically a thin spandex suit that has a bunch of little holes and little vents in the fabric that somehow lets your body breathe and keeps you cool. Ron wore that the whole time he wore his body suits and he seemed to really like that.

HSW: Have you ever had an actor totally "freak out" on you in the middle of a makeup application or while they're wearing a body suit?

Matt Rose: It's funny because I've had one freak out when we were taking him out of makeup, just one. And he was a handful because he was asking us -- the two guys that were taking him out, "You don't know what it's like wearing this stuff?!" I've worn it all man. Before Chad came along they'd do all the test makeup on me. I'd ask for it. So I'm really sympathetic to the actor. I know what it's like. But we have had a couple people faint when they've done body castes on them.

Chad Waters: ...What happens is as it [the body cast material] hardens it kind of keeps your diaphragm from moving, so you gotta not talk and take it easy breathing. It can knock your wind out real quick. I've seen -- three times somebody's passed out. But it's pretty rare. And it's usually because they aren't paying attention. We tell them, "Don't talk." Or, it's the first time they've done it so they bring family members along to watch the process and they're yapping to them and they're having a good old time and we're sayin', "You gotta watch yourself." And fair enough, "Whoa -- told ya!" (laughing) We're really nice about it. It's really hard when it happens but we try to warn this possibly can happen ... and then it happens and they're real embarrassed and on the floor.