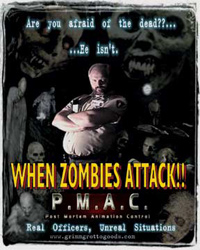 HSW: At the moment, both of you are freelancers. How is working freelance compared to working in the studio? Do you prefer one to the other?

Matt Rose: Every project is so different. There's something to be said about the security ... about being in the shop. But then, sometimes you can't pick and choose what kinds of movies you're working on. It's not like we're not gonna do a good job if it's a bad movie, but you work with so many great people in shop, it's great to have them again ... you develop a new technology ... and you apply it to the next one [project], the one after, and again. Working with these incredible people who are the best of the best from Cinovation [Rick Baker's shop] -- that's a joy. For instance on "Hellboy" we had Sylvia Nava making these hair pieces for us, and she is just this gem -- a wonderful woman of Hollywood -- she's been doing this stuff forever and we were lucky enough to have her ... that's so rare.

Chad Waters: So when there is no shop [note: Rick Baker's shop, Cinovation, was closed at the time of this interview] everyone kind of gets scattered and you loose that momentum that might have been being built. And, then you don't have a job every day and ... we don't have a name, you know. [We can't] just walk into some place and say "Hey we're so and so, can we have a job?" ... Fortunately for us we've been trying to segue into these other things on our own. Our own projects that we're talking about [their new movie project, "When Zombies Attack!!"] - it's been keeping us busy for sure, but not necessarily supporting us financially. This is one of those things that we're investing our time now hoping it will pay off later but there's just no guarantee. But at the same time there's just no guarantee at a shop either because at any point, they could shut down ... At least we're still young enough that we can adapt to the situations.

Cine-makeup effect in general has been damaged by the rise of computer technology, too. So, that's ... something we've been battling anyway. Luckily ... Rick's shop was always one of the two top shops in the industry so [as an employee] you're pretty much guaranteed some makeup work when it existed. But, if you're in a smaller shop, they're kind of just getting swept away ... So now that we're not in a big shop anymore, it does make it even more difficult to get a makeup job because a producer is now going to ask themselves, "Should we spend time and try to research a makeup effects company to do this monster or should we just wait 'till after we shoot the movie and do this CG [computer graphics] guy?" ... The trend lately has been just to do that. But thank God there are directors like Guillermo [del Toro] that understand that you need both to coexist in order to make something feel truly real.