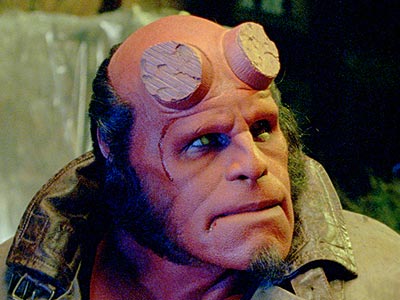 HSW: What are your backgrounds? What kind of makeup training have you had?

Matt Rose: I just started making masks when I was eleven. I was a big fan of monster movies and makeup and I jumped in when I could. I started in '85 on "Aliens" for Stan Winston working in the mold shop and getting to sculpt a few things. And from there you just hop around to different shops and do other projects. And then I landed the [job at] Rick's [Rick Baker] full time in '88 and, Chad?

Chad Waters: Well I never thought it would be possible to get into the movie business. I was always a fan of everything and ... in high school was monitoring it [the industry]. I took art classes and was drawing, and finally just as a fluke I got an internship type job on "Batman Returns" and that turned into working at Rick's [Rick Baker] forever 'cause I met a couple of guys that worked on that ["Batman Returns"] -- then worked with them on another project. And then they called up and said, "Hey do you wanna work at Rick's for a couple of weeks?" and I was like, "Yeah!" And it turned into 10 years.

It seems like ... we're all fans of the same kinds of stuff; same horror movies, same sci-fi stuff. I was a "Star Wars" kid. You know, that was probably the thing that got me into wanting to do all this stuff in the first place was "Star Wars." So we all have similar stories about Bernie Wrightson and zombie movies, stuff like that. We all have this built-in kinship or brotherhood that draws us all to this stuff.