Browse the article Does a corked bat really hit farther? 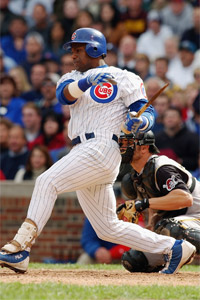 Sosa breaks his bat in September 2003, the same season that the legendary hitter was found to have used a corked bat. See more sports pictures.
Jonathan Daniel/Getty Images

It was No. 33 on ESPN's list of The 100 Most Memorable Moments of the Past 25 Years: Sammy Sosa, batting against the Devil Rays on June 4, 2003, shatters his bat on a hit against pitcher Jeremi Gonzalez. When umpire Tim McClelland picks up the splintered lumber, he spots a piece of cork wedged into the barrel. The incident left egg on Sosa's face and stirred up one of baseball's biggest controversies: Do corked bats give hitters an unfair advantage?

To answer that question it helps to understand, literally, the ins and outs of corked bats. A regulation Major League baseball bat is a solid piece of lumber typically fashioned from either ash or maple wood. Derek Jeter, for example, swings a Louisville Slugger made from ash. It's 34 inches long and weighs 32 ounces (86 centimeters and 907 grams). Now take Jeter's bat and drill a cavity, lengthwise, into the barrel. Make sure the diameter of the cavity is approximately 1 inch (2.5 centimeters) and that it reaches a depth of about 10 inches (25.4 centimeters). Fill the borehole with a lightweight material, such as cork or Styrofoam. Heck, if you have a few Super Balls lying around, you can shred them up and drop the rubber pieces into the cavity. Finally, plug up the hole with wood filler so your handiwork can't be detected. When you're done, you have a corked bat. But why go to the trouble?

Well, with wood removed from the barrel, the bat is lighter. We can calculate how much because we know the dimensions of the borehole. The volume of a cylinder is given by the following equation:

So, the volume of a 1-inch-diameter hole drilled 10 inches into a bat would be:

Now we can calculate the mass of the bored-out wood using the equation for density (d = m/V) and looking up the density for white ash wood, which is 670 kilograms/cubic meter [source: SI Metric]:

That means if you bored out Derek Jeter's bat, it would weigh about 29 ounces (822 grams). Of course, you're filling the borehole, so you need to account for the weight of the cork. Assuming the cork occupies the same volume as the hole and taking the density of solid cork to be 240 kilograms/cubic meter, we can calculate the weight of the cork filler [source: SI Metric]:

So, a corked bat weighs about 2 ounces (almost 57 grams) less than a regulation bat. For Derek Jeter, this would mean swinging a 30-ounce (850-gram) bat instead of a 32-ounce (907-gram) one. Moreover, filling a wood bat with cork changes its center of gravity, shifting it closer to the hands of the batter. These two effects combine to make the stick easier to swing, which means a batter can get it around with more velocity.

Does this really matter? It does, and we'll tell you why next.

Put a Cork in It (or Don't Actually)

How far a batted ball travels depends on how fast it's moving when it leaves the bat, a variable known as batted ball speed, or BBS. Increase BBS, and you increase how far a fly ball will travel. BBS itself depends on two factors: swing speed and the weight of the bat. A corked bat results in higher swing speed, an effect that would tend to increase BBS. But at the same time, such a bat weighs less, which means it transmits less power upon collision and leads to a decrease in BBS.

In 2011, a team led by Alan Nathan and Daniel Russell, two physicists who frequently study the science behind baseball, investigated just how these competing qualities of corked bats affect the velocity of batted balls. Their research focused on something known as collision efficiency, or q, a value related to a bat's ability to turn an incoming pitch into a solid hit. For an unmodified bat, the team found q to be about 0.214. For a corked bat, the value for q was 0.193 [source: Nathan et al.]. Next, they calculated batted ball speed via the following equation:

For a corked bat, it looks like this (note that the 3-mph increase is an educated guess on our part):

Notice that the batted ball speed is the same for both bats! The research suggests that the gains associated with increased bat speed are negated by the losses associated with decreased bat weight. In other words, the net effect of a corked bat is zero -- it has no real impact on the speed of batted balls and, as a result, how far they'll travel in the air.

Unfortunately, this doesn't end the controversy, because corked bats probably have another advantage. A good hitter doesn't just swing a corked bat faster. He can also swing the bat with greater acceleration, meaning he can move the bat from 0 mph to its top speed in a shorter amount of time. This allows him to wait longer on the pitch, to see a pitch better and to make necessary adjustments in his swing. He may not hit more home runs, but he'll make solid contact more regularly and likely have a better batting average.

Even in the face of scientific evidence, some hitters swear by their corked bats. It's quite possible that there's a placebo effect at work in such situations. After all, as any fan will tell you, baseball is played in the mind as much as it is on the field.