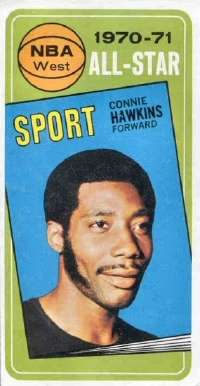 Connie Hawkins was the first ABA Scoring Leader in 1967-1968 with 26.8 ppg (points per game) average. See more pictures of basketball.

Connie Hawkins was a shadow star, a playground legend from New York City whose best games were witnessed by precious few. Banned from the NBA for eight years because of alleged contact with gamblers, Hawkins toiled on the periphery of the game, eventually starring in the American Basketball Association for two seasons before gaining admission to the NBA in 1969. He came full circle with induction into the Hall of Fame in 1992.

The 6'8" Hawkins elevated dunking to an art form, but he could do much more. He was a superb rebounder, ball-handler, and passer, and he could score in a variety of ways. One of his best efforts occurred in the deciding game of the 1968 ABA Finals.

Playing for Pittsburgh, Hawkins had 20 points, 16 rebounds, and nine assists as the Pipers toppled the New Orleans Buccaneers. In his first NBA season, "The Hawk" averaged 24.6 points and 10.4 rebounds with the Phoenix Suns.

Born July 17, 1942, in Brooklyn, Hawkins grew up skinny, impoverished, and poorly educated. He had his pick of colleges after leading Boys High School to back-to-back city championships, eventually choosing the University of Iowa.

Meanwhile, he had become friendly with Jack Molinas, an alleged sports fixer, and when Molinas went down, Hawkins went with him. Iowa dismissed Hawkins, and the NBA banned him for life.

In 1961, Hawkins, then 19, signed to play with the Pittsburgh Renaissance of the new American Basketball League. After the ABL folded a year and a half later, Hawkins joined the Harlem Globetrotters, but he never felt comfortable with the circus atmosphere.

Soon he was back in Pittsburgh, drifting from church league to pickup game while the best years of his career passed him by. His break came when the ABA debuted in 1967. While Hawkins played with the Pipers, his lawyer sued to have him reinstated by the NBA.

Hawkins was the first superstar of the ABA, averaging 28.2 points in two seasons and winning the Most Valuable Player Award in 1968. After moving to the NBA, he played seven seasons with the Suns, Los Angeles Lakers, and Atlanta Hawks and appeared in four All-Star Games.