Browse the article How College Football Crowns Its Champ 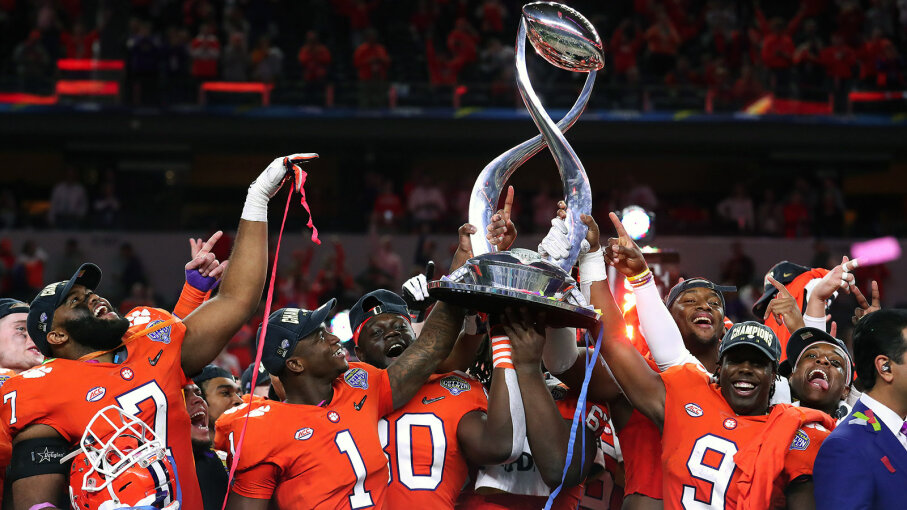 Nothing quite incites the passion and — let's call this like it is — madness of your average tailgate-loving, uvula-rupturing college football fan quite like the prospect of a true national champion.

You know what we're talking about here. Bragging rights. "We're No. 1!" The big foam index finger. All that.

Crowning a true national champion, in fact, is the singular reason behind the way that the sport currently picks its champ, a method ingeniously called the College Football Playoff (CFP). Well, that and making a gazillion dollars, of course.

The money part, the College Football Playoff has down. As part of a reported $7.3 billion deal with ESPN that runs through 2026, the major conferences that have contracts with the Rose, Cotton and Orange bowl games were expected to pull down nearly $60 million each in the 2017 football season alone. Five other conferences will split a pool of more than $80 million. (Schools that aren't in conferences, like Notre Dame, get theirs, too.)

The other part, crowning a true national champion on the field, undisputed and completely without controversy? Well, that's always been much trickier in college ball. Though, almost five full years after doing away with the Bowl Championship Series, things have gone remarkably smoothly. So far.

The operative words there: So far.

If there's one absolute when it comes to college football, its fans and their teams' seasonal quests to be No. 1, it's that disappointment and outrage are always within field goal range.

How the College Football Playoff Works

The CFP is a four-team playoff that determines the de facto national champion. It took the sport a while to get to this point, from the dark ages when polls of sportswriters were the only ways to pick the champ, through various other stages (the Bowl Coalition, the Bowl Alliance) and, finally, into the oft-maligned, multiple poll-driven, statistics-overloaded Bowl Championship Series (BCS) era, which began in 1998.

Talk about disappointment and outrage. The BCS, designed to pick the two best teams in the nation to play for the championship, was pockmarked by controversy. Although, for all its detractors and missteps, the BCS got the final two teams right almost all the time and, in the end, laid the framework for the CFP.

"I think [the CFP is] working pretty well. I don't know that they've picked the wrong teams, ever, in three years previous," says Berry Tramel, a longtime columnist and reporter for The Oklahoman. "I like it better than the BCS."

The CFP, the brainstorm of a bunch of university administrators and television executives, finally came into being after the 2014 season, with its first title game played in January of 2015 between No. 4 Ohio State and No. 2 Oregon. The idea behind the playoff is — this is often the case, isn't it? — tantalizingly simple: Pick the four best college football teams in the country, put them in two well-established bowl games and have the winners play for a national championship trophy a week later.

Selecting the teams even seems straightforward enough. A dozen or so former college players, current school athletics directors and administrators, former coaches (and even journalists!) meld minds and rank the contending teams (all members of the Football Bowl Subdivision, formerly Division I-A, the top level of college football) on a variety of factors, such as:

It's subjective. Even the CFP admits it: "For purposes of any four-team playoff, the process will inevitably need to select the four best teams from among several with legitimate claims to participate."

The selection committee first assembles a few weeks into the season for its first rankings, then meets every weekend until the end of the season. Just after the conference championship games, everybody settles on the four teams to play in the CFP. The committee seeds and places the teams in the semifinals, and fills out the other major New Year's Day bowl games, too.

As the 2019-2020 college football season entered its final weekend before the bowls, a weekend when conference championship games are played and the final rankings are announced, these four teams were on top (with win-loss records):

The team that holds to biggest key to the playoff picture is No. 4 Georgia. If the Bulldogs beat LSU in SEC championship game, Georgia will likely remain in the top 4 with Ohio State, LSU and Clemson. If LSU wins, however, things get more indecisive and opens up the No. 4 spot for Utah, Baylor or Oklahoma. One team that won't be in play for a spot is Alabama (10-2), who for the first time since the College Football Playoff started in 2014 ended its season in the No. 12 spot and out of contention.

Talks of a six- or eight-team playoff to appease the unhappy already have been raised. Whatever happens, though, this much is certain: People will watch, the bean counters will be laughing all the way to the bank and someone, somewhere will be upset. That's the game.

"It's football. People just love the game of football. It's fast-paced. It's got speed and violence and all the things that attract people to a variety of athletics," says The Oklahoman's Tramel. "It's also partisan. It's easier to get behind a university than it is, say ... pro franchises. Everybody loves the NFL and everything else. But you can't always identify with them as much as you can, say, the University of Iowa. Or Arizona State University. Everybody can identify with a place.

Now That's Interesting
The best team to play in the first three years of the CFP didn't even win the championship. NCAA.com ranked the 12 CFP teams (counting the same school in multiple years) and determined that the 2016 Alabama team was the best overall team, based on strength of schedule, total offense, total defense, wins against Top 10 teams and several other factors. But Alabama lost the 2017 CFP title game to Clemson (a team it had beaten in the 2015 title game) on a literally last-second touchdown pass. Defending national champion Clemson was ranked ninth-best of the 12 playoff teams.