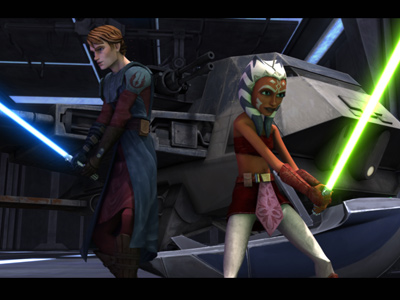 Just three years ago, Filoni dressed up as Plo Koon to see an opening night showing of "Revenge of the Sith," so it's not surprising that the 34-year-old fan is still pinching himself that he has this job. "It's a very creative atmosphere," he says of Big Rock Ranch, where the lakeside setting is "meant to inspire us artistically and definitely does. A lot of the people I work with grew up with 'Star Wars,' so we have a great time. It's hard, intense work, but George is very engaged in what we're doing. What more could you ask for? I have the guy who created the 'Star Wars' universe excited and interested in what we're doing. We couldn't be happier about that."

Asked why he thinks "Star Wars" remains a fan favorite today, three decades later, Lucas says diversification is the key. "We were always able to deal with different aspects of the story in various forms and I think that keeps it alive. It is a lot of fun and it's a universe that has been created to inspire young people to exercise their imagination and inspire them to be creative, and I think that always works."

"The original 'Star Wars' had broad appeal to everybody, and it holds up so well," adds Filoni. "I think there's a timelessness to it, even though Luke looks like a kid from the '70s with that haircut. Luke is a farmer boy and Han is a cowboy. Jedi Knights are like the samurai of Japan or the knights of Europe. Those archetypes work the globe over. It's a world phenomenon that speaks to everyone. There will always be a character you can relate to."

Lucas is dreaming up more of them all the time. In addition to producing a World War II action flick about African-American fighter pilots called "Red Tails," he's developing a live action "Star Wars" TV series "that has nothing to do with the Skywalkers, but does take place in that universe." Right now it's in the early stages of pre-production. Stay tuned.

Just a toddler when the original "Star Wars" was released, Filoni saw the movie when it had a summer reissue but was too young to recall much about it. "I do remember sitting in the back of my parents' car riding home from the movie, my brother and I pretending we were Han and Luke, shooting at the other cars as if they were TIE fighters," he says.

Years later, he was working at Nickelodeon when a Lucasfilm representative called on behalf of George Lucas, and he thought his fanboy buddies were playing a practical joke. "Luckily, I didn't hang up on her."

These days, his brother "has a hard time believing that I work with George Lucas." His young cousins are impressed too, and he welcomes them and other kids at Big Rock Ranch, where they're put to use as informal focus groups. "We get to find out early on if things are working," he explains.