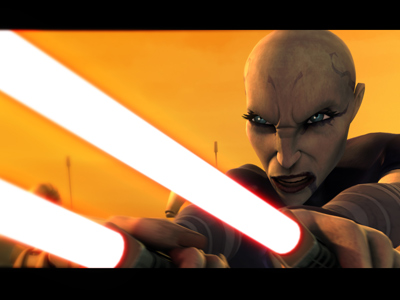 "The Clone Wars" shows a different side of some of the film franchise's most iconic characters. "In a series, you can do a whole episode about a character and learn more about what they were like, which makes what happens to them a lot more poignant," explains Filoni. "We know Yoda is powerful, but how does that power develop? How does he use it? We get to go into more detail that you just couldn't do in the live action films, because they're mainly focused on Anakin."

While few of the actors from the live action movies agreed to reprise their roles in voice over for "The Clone Wars," Anthony Daniels, the original C-3PO, is the exception. "One of the special moments for me was hearing Anthony on the telephone, discussing C-3PO with me and his experiences. That really helps us round out the characters," says the director, who enjoyed similar input from Rob Coleman, the animation supervisor who worked on Yoda on the prequels.

Of the new characters not seen in the live action series, there's the alluring but venomous Asajj Ventress, a disciple of Count Dooku. "She is, of course, a villain, and fits into the structure of the Sith," Filoni elaborates. "Darth Sidious -- Senator Palpatine -- is the main bad guy, and his apprentice is Count Dooku. Dooku is training Ventress in the Dark Side. She's getting more powerful. I wanted to make her intelligent, deceptive and also kind of sexual. She's kind of a forbidden fruit -- Jedi are not supposed to get involved with the more lustful aspects of life. She adds another dynamic to the series."

On the other side of the good/evil coin is newcomer Ahsoka Tano, Anakin's teenage pad­awan, or apprentice. "She's Anakin's student and helps us see him as more of a hero," says Filoni. "Once he gets over his initial reaction, he takes pride in her. He's unpredictable and the Jedi know that, but he has compassion and that is used against him and it later brings him to the Dark Side."

Ahsoka was created, says Lucas, "Because I needed to mature Anakiin. The best way to get somebody to become responsible and mature is to have them become a parent or a teacher. You have to think about what you're doing and set an example. You look at your behavior and the way you do things much differently. The idea was to use her to make Anakin become more mature. We've made her a more extreme version of what Anakin was- - a little out there, independent, vital and full of life, but even more so. He gets a little dose of his own medicine."

"She's been a really fun character to develop," adds Filoni, who likes Ahsoka but admits that his character tastes tend to run a bit more obscure -- his favorite is Plo Koon, "a bizarre Jedi Master. It's been fun to develop him and show his personality beyond the fact that he's bizarre looking and carries a light saber."