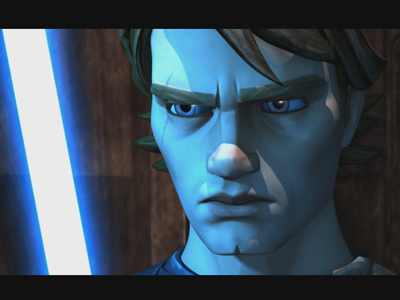 Taking some inspiration from the earlier cartoon series, Filoni approached the characters as a 2-D animator would, "but stylized the face a little more. If you look at Anakin, he has certain edges and lines in his face. I would draw an edge or a line that might be unnaturally straight or curved, and that would play into the lighting of it. I tried to sculpt in 3-D the way I would draw or sculpt an image in 2-D, with shadow and light. I wanted it to look like a painting -- you see a textured, hand-painted style on every character. I have texture artists who literally paint every single character right down to their eyeball, because I wanted that human touch on everything."

Advances in computer animation have allowed Filoni to accomplish much more than he would have been able to in traditional 2-D. "For eight years I worked just with a pencil. I never touched a computer. But working with George, we try to look at computers as an incredibly advanced pencil. The technical side helps the creative, artistic side," he says.

Battles filled with huge numbers of soldiers can be rendered faster than ever before, but they still have to be created, along with every other prop and character in an enormous universe. "'Star Wars' is so complex in that you're building a whole galaxy. We go to many different planets," Filoni reminds. "So every rock, tree, blade of grass, native vehicle -- every asset -- needs design. We had to create a whole bunch of assets for each episode, and the budget goes up for each element you have. Once you build it, you have it, but we can't go to a different planet and have the same chair there," he laughs. "On a schedule where we need those things right away, it's difficult to get it all built."

Since "The Clone Wars" is chronologically sandwiched between "Clone Wars" and "Revenge of the Sith," it has been a mandate for the creators to stay consistent with the mythology. "That's probably one of the trickiest things," admits Filoni. "We always have to keep in mind what the characters are thinking and feeling at the beginning of this and at the end. You have a lot of room to play with when you're in the middle, but you have to remember what people say in the third movie. With characters like Obi-Wan or Anakin or Padme, I have to pay very careful attention that it will hook up. And then there's the expanded universe of "Star Wars" novels and video games. I try to be aware of it all and work it in, because fans really appreciate it."

Filoni hopes to attract existing fans and create new ones, especially among the younger generation, but admits doing the latter may be easier. "One thing we have that's different from any movie that came before is we're an animated series. But there's an instant reaction to the word animation that it's for kids. How you get around that is with the stories you tell. We'll have our snow battles and we'll also have our lighter 'Return of the Jedi' moments. Some episodes lean older, some younger. But in the end it has a broad appeal," he believes.

The recent "Clone Wars" movie (out on DVD Nov. 11 ) served as a stand-alone prequel to introduce the characters at this point in time. In contrast, "The series has its small arcs and shows you the war from across a broad spectrum of episodes. It's not just Anakin Skywalker's story," Filoni underlines. "We can go left or right of that plot and deal with characters we have never seen. There's a lot of material. It's a three-year period in the history of the 'Star Wars' Universe, and there are so many stories to tell. The longer it goes, the more chance we get to tell fascinating stories in that galaxy."