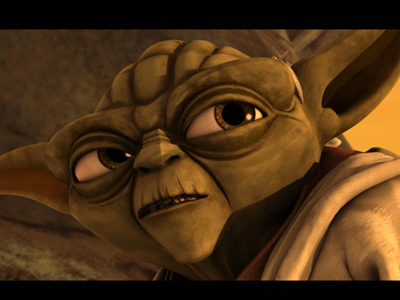 How do you scale down an IMAX-size spectacle for television and still have it make an impact, especially on a small screen budget? That's just one of the problems Dave Filoni has to solve.

"'Star Wars' is very famous for the scale of it, and how convincing it looks. So when you're doing a weekly television series, you have to figure out how to do things on that level," he notes. "Sometimes it forces you to be creative and come up with solutions that are better than if you can shoot everything you want," he continues, preferring to consider budgetary constraints a creative incentive rather than a limitation. "The team here is challenged to come up with these giant battles. We haven't shied away from anything."

While he did some of the initial character design, subsequently, Filoni has spent most of his time supervising other artists and animators, who number around 70 in-house and another 80 or so at facilities in Singapore and Taipei.

"Everything is written here, and the story and design and editing are all done here. The animation and lighting are done overseas, and sometimes some modeling as well," he outlines.

­"I meet with George to talk about the episodes and he hands out a lot of the storylines and main ideas for the stories. I'll draw while he's talking and show him the sketch," Filoni continues. "That way we communicate right off the bat about what something might look like."

At any given time, the director notes, episodes are in various stages of completion, "from designing to working on a final cut, or adding sound and color-correction. I have four episodic directors to help me, who each have an episode they're managing."

Rather than use computer animation to duplicate the live-action films' characters or continue in the very stylized vein of the 2004-2005 "Clone Wars" micro-series, "We kind of shot for the middle," says Filoni, who endeavored to blend a 2-D esthetic with 3-D technology.

"The 3-D model makers and riggers who worked on the prequels dealt with the height of realism to create convincing digital characters. I knew that we weren't going to be able to do that for the series. And we wanted it to be different than a live-action feature, to get away from photo-realism. It was a choice to simplify something in the character models, the same way we would do things in a 2-D show."

So how did Filoni stay true to the "Star Wars" legacy in this newest installment? Read on to find out.