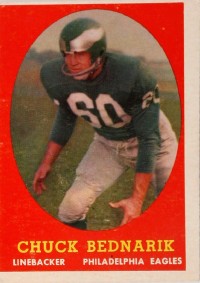 Chuck Bednarik’s body-slamming defensive skills often left his team with a victory and his opponents on the ground. Proof of this came in a 1960 Eagle-Giants game.

The Eagles had to beat the Giants. A victory would give Philadelphia a clear road to the division title; a loss would mean the likelihood of another year as an also-ran.

So when Chuck Bednarik slammed into Giants star runner Frank Gifford late in the game, separating him from the football and preserving the Eagles' win, Bednarik did an impromptu victory dance.

He didn't know Gifford was still lying unconscious on the ground behind him, but from the stands it looked like he was dancing with glee at Gifford's injury.

Gifford went to the hospital -- he was out of football for a year -- and Giants fans went wild with angry charges of dirty play. Eventually, films showed that Bednarik’s tackle was perfectly legal -- bone-jarring but legitimate, the kind he had been making for years.

Bednarik (born 1925) didn't really get into football until he returned from World War II (after 30 combat missions over Nazi Germany). He showed up unheralded at the University of Pennsylvania but was a consensus All-American in his last two seasons for the Quakers.

Over the next few years, Bednarik won all-league honors regularly as linebacker. Then, in the late 1950s, he went back to center on offense.

After 1959, with 11 seasons under his belt, he was ready to retire, but the Eagles talked him into coming back for what turned out to be the magical 1960 season. Early in the season, when a shortage of linebackers developed, he was asked to go both ways -- center on offense, linebacker on defense.

At the age of 35, he undertook a grueling task that men 10 years younger couldn't even consider. He was both sensational and inspirational. The Eagles won their division and the league championship. The title game ended appropriately with Bednarik tackling Green Bay's Jim Taylor short of a touchdown and then sitting on him until time ran out.