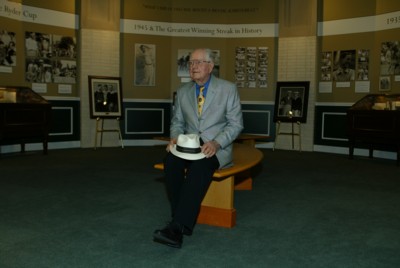 Byron Nelson's streak of 11 consecutive victories overshadowed his success in the majors. See more pictures of the best golfers.

Byron Nelson's streak of 11 consecutive victories on the PGA Tour in 1945 may be one performance record that stands the test of time.

The streak may never be topped not only because of its immensity, but because it would take a golfer who could play better than Nelson. There have been a few as good -- Jones, Hogan, Snead, Nicklaus -- but no one any better. Nelson's PGA streak was the work of an all-time master golfer.

John Byron Nelson Jr. was born in Fort Worth, Texas, in 1912. He was one of three children of a grain and feed merchant, and he grew up in a house beside the Glen Garden Country Club, where Byron began caddying at age 10. A fellow caddie, born the same year, was Ben Hogan.

In his first caddie tournament, Nelson shot 118 "not counting the whiffs," as Byron recalled. The next year, he shot 79. "I just fell into it," said Byron when asked how he got so good so fast. He was also the recipient of sound instruction early on from the club pro, Ted Longworth, and his assistants, Dick and Jack Grout. The latter would be Jack Nicklaus's lifelong golf mentor.

In 1930, Nelson won his first important tournament, the Southwest Amateur. But he "came up" in the heart of the Depression, and he couldn't afford to play amateur golf. In the casual manner of the day, he turned pro in 1932.

"Ted Longworth started a tournament in Texarkana, where he was now the pro," Nelson recalled.

"The total prize money was $500, and there are people playing in it like Dick Metz and Ky Laffoon -- established players -- but I rode a bus over there carrying my little Sunday bag and suitcase, paid my $5 entry fee, and played in my first tournament as a pro. All you had to do then was say you were playing pro, and that was it."

Nelson finished third, won $75, and was encouraged. But he soon found himself struggling to make a living and took a job as professional at a golf club in Texarkana. He lived in a boarding house, saved his money, and practiced.

"Very seldom did anybody come to the club before noon on any day," he said. "There was an excellent practice field, so I hit balls. I hit 'em down, then hit 'em back. So I got better and better."

He made a couple of forays on the pro Tour in 1933 and 1934, driving a Model-A Ford roadster. The first time out, he came back nearly broke. In 1934, he did a bit better, but when offered a job as assistant pro at a fine club in New Jersey, he decided to take it.

At about that time, steel shafts had taken over from hickory, and Nelson found he had to make major changes in his technique to adapt to them. He is credited as being the first important golfer to design a golf swing specifically for steel shafts: a more vertical action that, with irons especially, produced crisper, more accurate shots.

In 1936, Nelson won the Metropolitan Open, a PGA sectional (New York-New Jersey) event but one in which such golfing luminaries as Craig Wood, Paul Runyan, and Tommy Armour -- also club pros in the area -- competed. It was the equivalent of a full-fledged PGA Tour event. Nelson was on his way.

In 1937, Nelson won the Masters, and in doing so gave first evidence of his proclivity for streaks of hot golf. With seven holes to play and four shots behind the leader, Nelson birdied the par-3 12th, eagled the par-5 13th, and parred in to pass Ralph Guldahl.

(When he won the 1945 PGA Championship, during his fabled "streak," Nelson was two down with four holes to play in his second-round match against Mike Turnesa. He birdied the 33rd and 34th holes, eagled the 35th, and won, 1-up.)

After his '37 Masters victory, Nelson was chosen to play on that year's U.S. Ryder Cup team, indicating he was now one of the game's "establishment" players. He secured that place all the more in 1939 when he won the prestigious North and South Open, the Western Open, and the U.S. Open.

In the U.S. Open, he hit one of the most memorable shots in golf history. In the final playoff round, on the long par-4 4th, Nelson drilled a 1-iron second shot into the hole for an eagle-2. A stunning shot, it reflected one of Nelson's greatest attributes as a golfer -- phenomenal accuracy.

In 1940, Nelson won three tournaments. One was his third major, the PGA Championship, in which he was one down to Sam Snead with three holes to play in the final and birdied two of the last three to win, 1-up. From 1941-44, Nelson won 14 tournaments (eight of them in '44), including another Masters.

Then came The Streak. Nelson was rejected from military service during World War II owing to a blood deficiency, and it has been said that his run of victories in 1945 was not against the toughest possible fields.

Hogan and Jimmy Demaret, in the Navy at the time, played in only two of the "streak" events. However, Snead had been discharged from the Navy with a back problem, and he played in all but three of them.

In any case, stroke-play golf is essentially played against the course, and Nelson played them awfully well. During The Streak, he played 38 rounds of stroke play (we omit the first victory, a four-ball in which he had a partner, as well as the match-play formatted PGA Cham­pionship), which included two 18-hole playoff rounds against Snead to decide the Charlotte Open.

Through­­out The Streak, Nelson went round in 2,581 strokes for an average of 67.92 per round. In those 38 rounds, he was 113-under-par. Highlights? Nelson won the Iron Lung Open with a score of 263, a Tour record for 72 holes. In winning the Philadelphia Inquirer Invitational, he birdied five of the last six holes to win by a stroke.

Another demur regarding The Streak has been that Nelson had the advantage of preferred lies in the fairways at a few events, because not all the courses were in the best condition owing to shortages of machinery and materials during the war years.

However, he also had to putt on greens that contrasted to those on the modern-day Tour; it's like comparing two-lane country roads to a new interstate highway.

What's more, as Nelson once remarked, "back then you couldn't repair pitch marks or clean your ball on the greens." There is simply no getting around it. Nelson's streak was an unmatchable exhibition of sustained excellence.

Ironically, The Streak was ended when an amateur, Freddie Haas Jr., won the Memphis Invitational. But the next week, Nelson won again, then six more times for a total of 18 victories on the year, which itself is a record that still holds and may well hold as long as the 11 in a row.

Exhausted by his efforts, Nelson said after the 1945 season that he was retiring from competitive golf. However, before making it final, he won six times in 1946 and won his last tournament in 1951, when he was 39.

Nelson then became an important teacher in the careers of Ken Venturi and Tom Watson, to name but two of his students, then a golf television analyst for many years. And beyond that, he was a warm, unpretentious ambassador for the game.

Because he played his best before the PGA Tour had become as popular as it would, and before television began extensive coverage of it, Nelson's talent at golf was not exposed as widely as was that of his contemporaries, Hogan and Snead, who were born in the same year. But those who were there knew what Nelson had. Everything.