To Bunt or Not to Bunt -- That Is the Question 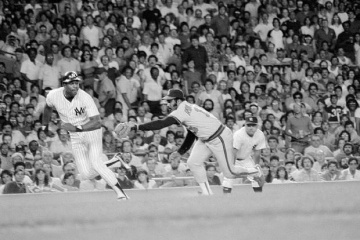 Bunting, says Bill James of sabermetrics fame, is "the only play in baseball that both sides applaud." Nevertheless, the "short game" still sees its share of tactical uses.

A squeeze play is an almost guaranteed out at first, so it's not an option for a team with more than one out (with two outs, an out at first would end the inning and scotch the scoring run). It is also a poor bet with two strikes because, unlike a foul tip from a swing, a foul bunt counts as a third strike. In fact, squeeze plays are fairly rare, because a batter coming to the plate with one out and a runner on third will likely swing away or hit for placement unless the runner on third sports a set of wheels and a turbocharger and there is a weak hitter (but good bunter) at bat [source: MLB].

A squeeze play is a special case of a sacrifice bunt, in which a bunter sacrifices a base hit to advance a runner. With a runner on first, the bunter would aim between the pitcher's mound and first; with a runner on second, or runners on first and second, the batter would bunt toward third to pull the third baseman off the bag [source: Morgan and Lally].

The creative bunter has other options too, such as the slap bunt, in which the batter chops at the ball after faking both a hit and a bunt. A player might also try to bunt for a hit. For example, a left-handed batter might try a drag bunt, in which the bunter's weight shifts forward during the pivot, gaining a jump on the run to first. The move requires almost balletic grace and timing to pull off well; novices will try to run while bunting, or will not hold the bat stiffly enough to keep the ball fair [sources: Adair; Curry; Morgan and Lally].

Mickey Mantle's drag bunts were legendary. In 1956, he beat out more than a dozen during his successful pursuit of baseball's Triple Crown, in which a single player leads the league in batting average, home runs and runs batted in [sources: Friend; Povich, ESPN].

Ultimately, bunting changes the rhythm of the pitch, pulls players out of position and puts the infield under pressure to catch quickly, make smart decisions and throw well -- all useful advantages for the team at bat.

In a likely bunt situation, the infielders need to hold leadoffs to a minimum; then, just before the pitch, they should "cheat" toward their coverage positions. Once the bunt is shown or the pitch thrown -- preferably a high strike (high in the strike zone), the hardest pitch to bunt, and a potential popup double-play -- the first baseman "crashes" toward home plate, the second baseman shifts to cover first, while the third baseman charges home. The pitcher fields toward first, the shortstop covers third or second, depending on the play, and the catcher calls the throw [sources: Baseball From the Ground Up; Quality Coaching].

During a sacrifice bunt, the lead runner presents a tempting target but, when in doubt, get the out, even if it's at first [sources: Baseball From the Ground Up; Quality Coaching].

I've always been a fan of team players and playmakers. You can keep your homerun kings, your ball-hogging board slammers and your hail-Mary-hucking QBs -- give me the guy who will lay down a sacrifice bunt, dish the rock or throw the perfect block. It's not just that they are unsung heroes; it's that I appreciate the skill level, the discipline and the teamwork their play represents. I admire the vast array of tools in their kit -- and the options those moves open up for their coaches and teams.

So let's hear it for the Brett Butlers, Larry Birds and Tom Rathmans of the world. You don't build dynasties on the backs of one or two showboats, but a good utility player might get you halfway there.