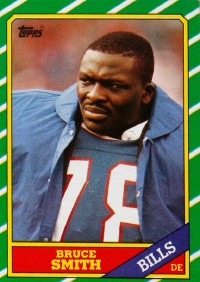 Bruce Smith had 19 regular-season sacks in 1990, only three short of the official NFL record. See more pictures of football players.

Few players will ever dominate a position the way Bruce Smith has mastered the defensive end spot for the Buffalo Bills. His speed and strength have made him one of the most feared and respected players in the modern game.

Teams routinely double- if not triple-team the former Outland Trophy winner and Virginia Tech All-American. And, even though he's lightning quick, Smith is not just an outside pass rusher. "He's so powerful," Minnesota Vikings quarterback Warren Moon pointed out, "that he can bulldoze over you."

The first player selected in the 1985 NFL draft, Smith (born 1963) has been the Bills' prime defensive weapon since his rookie season. Named AFC Rookie of the Year by the NFL Players Association, he is Buffalo's all-time sack leader. A nine-time Pro Bowler, the 6'4", 273-pounder has been named the AFC Defensive Player of the Year five times.

Most observers agree that the 1990 season was Smith's finest. His 19 quarterback sacks were second in the league, and more than once his dominant play changed the complexion of a game.

Against the New York Jets, he recorded two sacks, defensed a pass, and forced two fumbles. In Week 14, against the Indianapolis Colts, he sacked quarterback Jeff George four times in the first 20 minutes of the game. And in Super Bowl XXV, he came up with one of the biggest plays of the game when he sacked New York Giants quarterback Jeff Hostetler in the end zone for a safety, giving the Bills a 12-3 lead.

Even after 12 seasons, Smith remained dedicated to preparing for an opponent. At 34, he showed no signs of slowing down and still spent countless hours studying game films and working out in the weight room. An intense player, Smith will eventually have to shift his focus from game-day preparation to the easier task of preparing for his inevitable induction into the Pro Football Hall of Fame.