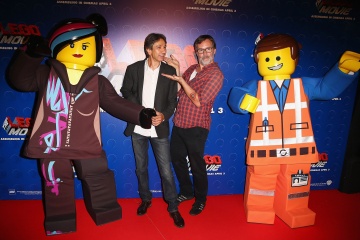 It’s debatable whether “The Lego Movie” qualifies as a brickfilm, but no one can deny the film’s popularity.
© Don Arnold/WireImage

People of all ages and from all over the world have made lots of brickfilms over the years, from action to comedy, and from entirely original creations to parodies or recreations of movies, video games and anything else you can imagine. There are more than 600 collected on the Internet Archive in a spot dedicated to brickfilms, and many more can be found elsewhere online [sources: Brookes, Internet Archive]. YouTube has entire channels dedicated to the art form, and there are studios that churn them out. Anyone with a little equipment, time and imagination can make one.

The first brickfilm (as far as we know as of this writing) was called "Journey to the Moon" (or "En rejse til månen"), made in 1973 by young cousins Lars and Henrik Hassing on Super 8 film for their grandparents' anniversary. The kids used stop motion, props on wires and one live-action shot of a foot to depict a rocket launch, journey and moon landing. It didn't have any sound and employed papier-mache and Lego-built sets and props (as well as a globe for the Earth). The movable minifigures didn't come out until 1978, so the characters were also built with Lego bricks. Although it's the first known, the brickfilm wasn't actually widely available until Lars Hassing posted it to YouTube in 2013.

The first widely viewed brickfilm was "The Magic Portal," created on 16 mm film and released in 1989 by Lindsay Fleay while he was a film student. It depicted the shenanigans of a few characters on a spaceship who go through a portal that takes them to various places where they encounter aliens, robots and other characters. Fleay received a grant from the Australian Film Commission for the production and used lots of donated Lego sets. It took several years to complete, including nearly a year for photography. Many of the set pieces were constructed of Lego bricks, and several characters were stop-motion animated minifigures, but the film also incorporated other stop-motion animated objects, some live-action shots of the animator, outdoor scenes and claymation. Its graphics are especially impressive given that it was shot and edited on film, and it no doubt inspired many later brickfilm makers.

There are too many great brickfilms out there to name them all, but a few other notable ones include:

It's debated whether the 2014 Warner Brothers film "The Lego Movie" can be considered a brickfilm because most of the Legos and minifigures were computer generated. But it definitely caught the spirit of the genre; it contained some homages to brickfilms, and some fan-created brickfilms even made it into the movie, such as BrotherhoodWorkshops' "Gorgy Wants a Horse," winner of the Rebrick Lego Movie Competition (an official Lego brickfilm competition) [source: BrotherhoodWorkshop].