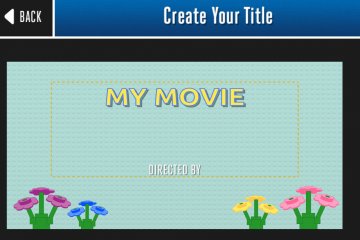 The Lego Movie Maker app will guide you through assembling your masterpiece, starting at the very beginning with a title card.
Screen capture by HowStuffWorks

Computers and digital cameras have made stop-motion photography much easier. You no longer have to take photos on film, send them for development and hope they turn out. With digital, you can have the instant gratification of seeing your shots right away, and you can easily transfer the images to your computer to animate them with software.

You'll need an animation or film-editing program, preferably one made for stop motion. Dedicated stop-motion software often allows you to connect your camera to your computer and run the software while you take your shots (although you might need to check your camera compatibility). But even multipurpose animation software like Adobe Flash will do.

Aside from just allowing you to string the images together and export them as a film, animation software has other features you can use to improve your film. Most software has a handy feature called "onion skinning" that lets you see transparent versions of previous frames on the screen with your current image. You can use it to see how the motion in a scene is progressing and change course if necessary. Animation software also lets you tweak lighting and colors and add other special effects. If you shot using a blue or green screen, you can use the software to knock out that color and add a new image in its place. This is referred to as color keying, chroma keying, or blue- or green-screening. You can even add fancy details like a lightsaber glow, for instance, using the rotoscope technique.

CGI takes some practice and skill, so you can also just use the software for the basics: getting your images imported and in order, setting the frame rate so the software knows how fast to play back the images, adding in your sound and exporting your film in a playable video format. But if you have the patience for stop motion, you might also have the patience to develop other filmmaking skills.

You might want to use sound editing software, such as Audacity, for recording and editing your dialogue and other sounds. You can also find some pre-recorded sound effects online or in software packages. Once you have your sound recorded, pull it into whatever software you're using to edit the video.

There are lots of software packages to choose from, some free and some for a price, including:

In some cases you might want or need to use multiple software packages; for instance, you might pick one for capturing and animating the images, another for capturing sound and a third for editing all the elements into the final film. You will just need to research what each one can do and whether it suits your needs.

Lego itself has even gotten into the game with their free app, Lego Movie Maker, which lets you create stop-motion animations right on your phone or tablet. You could conceivably use this or other stop-motion apps to shoot and edit an entire brickfilm on your phone.