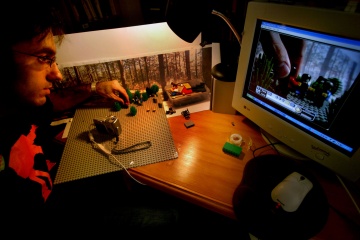 The most important ingredient for making a brickfilm is time.
© Fairfax Media/Fairfax Media via Getty Images

To make a brickfilm, you need a story, some bricks, camera equipment and some way to edit — plus lots and lots of time.

The most common method of creating a brickfilm is stop-motion photography, but some filmmakers use other methods, like filming actual moving props and figures (held by wires, hands or the like), and some throw in other elements like live-action human actors, claymation and computer-generated imagery (CGI) for special effects.

All filmmaking takes lots of work, but stop-motion is a particularly time-intensive process. It requires creating and setting up set pieces and characters, moving them in tiny increments and photographing them after each miniscule change. The resulting series of still images is strung together and played in quick succession as a movie, creating the illusion that the characters and other objects are in motion.

Traditional live-action films are made up of still images, as well. "Movie" is short for moving picture, after all. But in the case of traditional live action, the photographic images are taken on moving film of subjects who are actually in motion. The film is capturing reality. With stop-motion, a lot of thought and work has to go into making changes to the position of each little moving piece or body part in a way that will mimic realistic movement in objects that, on their own, would otherwise just lie still.

It also takes a lot of these individual pictures to make a stop-motion film. A film's speed is given in frames per second (fps), which is the number of still images that flash before your eyes in one second. A typical speed for a theatrical film is 24 fps. That is 24 pictures flashing before your eyes in a single second of time. At that speed, making a five-minute film takes 7,200 individual photographs. Even a one-minute, 24-fps film takes 1,440 pictures. As you can imagine, these take quite a while to stage and film, and likely even longer to get them looking the way you want.

You can reduce or increase the number of frames per second. Reducing gets the number of pictures down, but also makes the movement jerkier. Using 24 fps (the film standard) or 30 fps (the video standard) makes for much smoother motion, but 12 or 15 fps are common for brickfilms and other stop-motion animation. And a lower fps setting is fine if you're going for a jerkier look. One common technique in animation is to shoot 12 different frames for one second of film but to double them up, using two identical photos consecutively to make the playback speed 24 fps. Of course, the more pictures you take for each movement, the smoother the end result.

Building your sets piece by piece, or brick by brick, before the shoot can also take a lot of time. Most brickfilms employ set items built with Lego or similar bricks, with Lego minifigures or similar toy figures as the characters. You can include non-brick objects, non-minifig characters, painted backgrounds, papier-mâché set pieces or anything else to augment your brickfilm. You can even film against a special green or blue backdrop if you want to use color keying to composite in new backgrounds during editing. But Legos, or their competitors' similar pieces, will need to figure prominently in order for it to be considered a brickfilm.