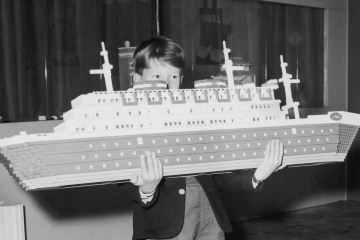 The films get their name from the building-brick sets with which they are traditionally made. Lego didn't always make toy construction sets, but it's the invention for which they're most famous and which has dominated their business ever since. Lego was founded in 1932 in Billund, Denmark, by Ole Kirk Kristiansen, a carpenter who decided to make and sell wooden children's toys. The company name came from Danish phrase "leg godt," which means "play well."

The company branched out into injection-molded plastic in the 1940s and began making the forerunner to modern Lego brick building sets late in the decade, initially calling them Automatic Binding Bricks. In 1958, the interlocking bricks were redesigned into the form they still hold today, which made them lock together much better than before. In 1978, the company introduced minifigures, little toy people with moving arms and legs, to go along with the sets.

Lego has been putting out all sorts of themed sets for decades, packaged with detailed instructions for building what you see on the box. There are sets for buildings from various localities and time periods, from Medieval castles to Wild West towns to modern city blocks, and vehicles of all sorts, from pirate ships to automobiles to spaceships. Lego also makes high-end architecture sets for famous buildings such as the Sydney Opera House and London's Tower Bridge. And Lego sets now also include a great many licensed franchises including "Star Wars," "Indiana Jones," "The Lord of the Rings," "Ghostbusters," "Harry Potter," "The Simpsons" and Marvel superheroes. The popular video game "Minecraft" even has a few sets, which is entirely appropriate given that the game involves constructing buildings and other items out of virtual blocks.

Not only do the sets give children (and adults) the ability to build lots of cool buildings and vehicles out of Lego bricks, connectors and other construction necessities, but they also come with appropriate props and minifigures. You can build based on the instructions, or piece together whatever you like from one or more sets. The bricks and other construction pieces come in multiple colors and sizes, and you can buy the ones you need if you have your own special design in mind.

Since Lego's brick design patents expired in 1978, other companies have gotten into the building-brick business, including Best-Lock and Mega Bloks, which both make cheaper bricks that are mostly compatible with Lego bricks. Mega Bloks has the rights to make building sets for several franchises including the video games "Halo," "Call of Duty" and "Assassin's Creed," as well as the Barbie and Hello Kitty toy franchises.

But building sets are no longer used just for everyday play. The sturdy interlocking bricks and their accessories are perfect for making small movie sets for brickfilms — starring minifigures, of course.