How Was It Invented? 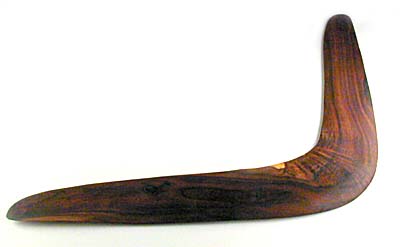 Boomerangs make perfect sense once you understand all of the physical forces at work, but it doesn't seem like something early man would suddenly come up with out of the blue. So how on earth did this amazing invention come about? Anthropologists believe it was mostly a matter of trial and error.

First let's consider how a primitive hunter might have come up with a non-returning boomerang. We know that at some point people started using the rocks and sticks they found around them as crude tools. One very early invention was the club, which is just a stick that you hit something or somebody with. Hurling a club to hit somebody is just a slight extension of this basic tool, so it's not a stretch to suppose that this was a common use of the club.

In nature, there are plenty of sticks that are bent in a curve like a boomerang, and people probably threw these sorts of sticks all the time. Because of the stabilizing motion of the two branches of the stick, this sort of stick would have stayed aloft longer and would have been easier to send in the desired direction. Primitive humans noticed this, and so they started specifically seeking out bent sticks when they wanted to throw a club at their target. Then they started selecting the best curved sticks (thinner, longer ones work better) and were soon customizing sticks so they were especially suited for taking down prey. Non-returning boomerangs have been found all over the world. The oldest known non-returning boomerang, an artifact found in Poland, dates from about 20,000 years ago.

The experts aren't really sure when and where people first developed returning boomerangs, but the Aborigines of Australia are generally credited with the invention. Aborigines used non-returning boomerangs, which they call kylies, extensively in hunting, and the theory is that at some point, one or more Aborigines used a kylie with the particular shape of a boomerang and noticed that it traveled in an arc. This might have been pure accident or it might have been the result of design experimentation. One theory is that an Aboriginal hunter fashioned a smaller kylie with a more angled curve because he or she noticed how a bird held its wings in a pronounced V shape while soaring through the air.

The amazing flight pattern of the new discovery didn't really help out much in taking down prey -- it actually made it harder to aim accurately -- but it was, of course, really cool. Evidently, the Aborigines perfected the boomerang design and throwing technique for the simple pleasure of it, and the boomerang has mostly been used as sports equipment ever since then. The standard game is to see who can throw the boomerang the farthest and still catch it on its return. The boomerang did have some limited use in hunting, however. The Aborigines would set up nets in trees and then throw the boomerang into the air while making a hawk call. This would scare flocks of birds so they would fly down into the nets.

The boomerang is actually the first man-made flying machine, and so it is the direct predecessor of the airplane, helicopter, blimp -- even the space shuttle! It's amazing that a hunk of wood can make such effective use of complex principles of physics -- so amazing that it really seems like magic until you understand what's happening. The boomerang is a great learning tool for anyone interested in physics, and it is certainly one of the most remarkable toys in history!

For lots more information, check out the links below.