Why Does It Fly? 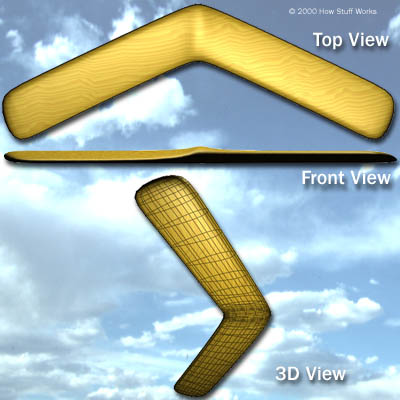 A boomerang is two wings combined in one unit.

If you throw a straight piece of wood that's about the same size as a boomerang, it will simply keep going in one direction, turning end over end, until gravity pulls it to the ground. So the question is, why does changing the shape of that piece of wood make it stay in the air longer and travel back to you?

The first thing that makes a boomerang different from a regular piece of wood is that it has at least two component parts, whereas a straight piece of wood is only one unit. This makes the boomerang spin about a central point, stabilizing its motion as it travels through the air. Non-returning boomerangs are better throwing weapons than straight sticks because of this stabilizing effect: They travel farther and you can aim them with much greater accuracy.

The returning boomerang has specialized components that make it behave a little differently than an ordinary bent stick. A classic banana-shaped boomerang is simply two wings joined together in a single unit. This is the key to its odd flight path.

The wings are set at a slight tilt and they have an airfoil design -- they are rounded on one side and flat on the other, just like an airplane wing. If you've read How Airplanes Work, then you know that this design gives a wing lift. The air particles move more quickly over the top of the wing than they do along the bottom of the wing, which creates a difference in air pressure. The wing has lift when it moves because there is greater pressure below it than above it.

The leading edges of the two wings face in the same direction, like the blades of a propeller.

As you can see in the diagram, the two wings are arranged so that the leading edges are facing in the same direction, like the blades of a propeller. At its heart, a boomerang is just a propeller that isn't attached to anything. Propellers, like the ones on the front of an airplane or the top of a helicopter, create a forward force by spinning the blades, which are just little wings, through the air. This force acts on the axis, the central point, of the propeller. To move a vehicle like a plane or helicopter, you just attach it to this axis.

The classic boomerang's propeller axis is only imaginary, so it obviously isn't attached to anything, but the propeller itself is moved by the forward force of the wings' lift. It would be reasonable to assume, then, that a boomerang would simply fly off in one direction as it spun, just as a plane with a spinning propeller will move in one direction. If you held it horizontally when you threw it, as you do with a Frisbee, you would assume that the forward motion would be up because that's the direction the axis is pointing -- the boomerang would fly up into the sky like a helicopter taking off, until it stopped spinning and gravity pulled it down again. If you held it vertically when you threw it, which is the proper way to throw a boomerang, it seems that it would simply fly off to the right or left. But obviously this isn't what happens.

In the next section, we'll see why a boomerang turns and comes back to you.