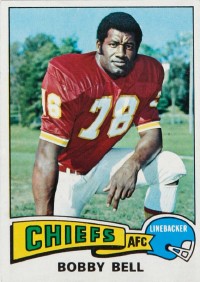 Bobby Bell was regularly timed at 4.5 in the 40-yard dash. See more pictures of football.

Bobby Bell was the most decorated college lineman of the 1962 season. University of Minnesota coach Murray Warmath described the two-time All-American choice and Outland Trophy winner as "the greatest lineman I have ever seen." It’s hard to believe the versatile 6'4", 225-pound Bell actually began his college career as a quarterback.

The Kansas City Chiefs of the fledgling American Football League were so convinced that Bell (born 1940) would sign with the rival NFL's Minnesota Vikings that they didn’t even bother selecting him until the seventh round of the 1963 draft.

The Gophers star stunned the pro football world, however, when he opted to sign with the Chiefs. "I liked the way the club treated me," he offered.

Bell, a tremendously skilled athlete, demonstrated his versatility in the pros by playing defensive end before moving to linebacker. As a defensive end, he excelled in coach Hank Stram's "stack" defense, which called for him to drop out of the 4-3 alignment and become a fourth linebacker.

In 1965, after winning all-league honors as a defensive end, Bell was shifted to outside linebacker, where he remained for the rest of his career. His size and 4.5 speed made him ideal for the position. "I just liked to play football," Bell said, "no matter what the position."

Big plays were commonplace for the talented Bell, who won All-AFL or All-AFC designation nine times. In a 1965 game, he recovered two fumbles that were converted into touchdowns in a 14-10 victory over the New York Jets. A year later, he followed a touchdown-saving tackle with an interception that set up a game-winning touchdown over the Boston Patriots.

During his 12-year career, he intercepted 26 passes, returning six for touchdowns. He also scored on an onside kick and a fumble recovery.

Teammate Buck Buchanan called Bell "the best all-around football player I ever saw. He's the best defensive end, corner linebacker, and anything else defensively in the whole universe!" Bell earned universal acclaim in 1983 with his election to the Pro Football Hall of Fame.