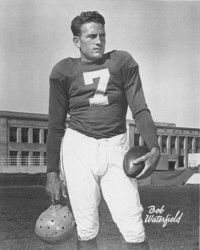 Bob Waterfield played quarterback for the Cleveland Browns and led  the NFL in passing in 1946  and 1951. See more pictures of football stars.

Bob Waterfield burst onto the pro football scene in 1945, when he quarterbacked the Cleveland Rams to the NFL championship, sealing the crown with a pair of touchdown passes in the title game. He was named both Rookie of the Year and Most Valuable Player.

The following season, the Rams moved to Los Angeles, and Waterfield went home. He had starred at UCLA, where he met and eventually wed movie queen Jane Russell.

For all his athletic ability, Waterfield's quiet and unemotional leadership was equally important to his team's success. In the 1950 divisional playoff, the 6'2", 200-pound Waterfield was unable to practice all week because of the flu, but he came off the bench to throw three touchdown passes in a 24-14 win over the Bears.

Waterfield was one of the most versatile players in NFL history. In addition to his QB chores, he was an ace defensive back for his first four years in the NFL, a top punter with a 42.4 average, and a deadly place-kicker.

In eight seasons, Waterfield totaled 573 points on 13 TDs, 315 PATs, and 60 field goals. And, although running with the football wasn't part of his job description, he could do that effectively in a pinch. Some credit him with having invented the "bootleg" play.

In one 1948 game, the Rams fell behind eventual league champion Philadelphia 28-0. Waterfield rallied his team to a tie on four late touchdown passes. After the game, Rams coach Clark Shaughnessy could only rave about Waterfield's ability as a defensive back! He had held Eagle All-Pro end Pete Pihos without a reception.

Waterfield was named to the Pro Football Hall of Fame in 1965.