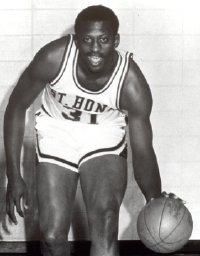 Bob Lanier -- and a bronzed pair of his size 22 shoes -- made it into the basketball Hall of Fame. See more pictures of basketball.

Bob Lanier was responsible for "the biggest feets in basketball," -- according to a popular beer commercial. A mountain of a man at 6'11" and 265 pounds, Lanier wore size 22 sneakers and holds the distinction of having his shoes precede him into the Hall of Fame (a bronzed pair is on display in the Hall). Lanier is one of only six players to have his number retired by two different teams.

The left-handed Lanier had a surgeon's touch on his fallaway jump shot and short, quick moves in the lane. He hustled as much as his lumbering body would allow and -- at least early in his career -- blocked shots with impunity.

Knee injuries eventually grounded him, but they never took away his ability to put the ball in the basket. He topped 40 points 20 times in his NBA career. Born September 10, 1948, in Buffalo, New York, Lanier starred at nearby St. Bonaventure University, sparking a basketball resurgence at the school.

During his three-year college career, he averaged 27.6 points and 15.7 rebounds a game and led the Bonnies to the Final Four his senior season. His pursuit of a national championship ended when he suffered torn ligaments in his right knee before the semifinal game.

Selected by the Detroit Pistons as the top pick in the 1970 draft, Lanier averaged 15.6 points and made the All-Rookie Team. He played nearly 10 seasons with the Pistons -- peaking in 1974 when he finished third in voting for the Most Valuable Player Award -- before being traded to Milwaukee in 1980.

Each of his five seasons with the Bucks ended with a division championship, but Lanier never played in the NBA Finals. Off the court, he served as president of the NBA Players Association. He received the 1978 Walter Kennedy Citizenship Award and the 1981 Jackie Robinson Award for his work in the community.

Lanier retired in 1984 after undergoing his eighth knee operation. He played in eight All-Star Games, winning MVP honors at the 1974 renewal. He joined his size 22s in the Hall of Fame in 1991.