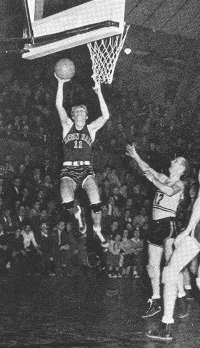 Bob Davies began the basketball world's fascination with ball-handling wizards in the 1940s. Eight years older than Bob Cousy and nearly as slick, Davies thrilled fans by dribbling behind his back and between his legs. His sleight of hand earned him the nickname "The Harrisburg Houdini" and spawned a legion of imitators.

Born January 15, 1920, Davies began playing basketball in the alleys of Harrisburg, Pennsylvania, shooting tennis balls into a five-gallon can tacked to a telephone pole. He weighed 90 pounds when he entered high school but grew to 5'11" and 142 pounds by his senior year. A good athlete, he went to Seton Hall on a baseball scholarship and signed a contract with the Boston Red Sox. Playing basketball on the side, he led Seton Hall to back-to-back undefeated regular seasons.

Meanwhile, Davies perfected the behind-the-back dribble, though no one paid attention until he used it at the National Invitation Tournament in 1941. A famous story is that a Seton Hall priest dropped dead of a heart attack after seeing Davies's move. Years later, when Davies was with Rochester in the NBA, Royals coach Les Harrison ordered him to stop going behind his back because he was showing up his opponents. Grudgingly, Davies complied.

In 1945, after three years in the Navy, Davies signed with the Royals, then a member of the National Basketball League. His teammates included future New York Knicks coach Red Holzman, pro football great Otto Graham, major-league catcher Del Rice, and Chuck Connors, who went on to fame as television's "The Rifleman." For the next decade, Davies was the No. 2 attraction in professional basketball, after George Mikan. His best game was on Christmas Eve, 1949, when he scored 33 points and hit a circus shot to beat New York in double overtime. He was Most Valuable Player of the National Basketball League in 1947 and led the Royals to the NBA championship in 1951.