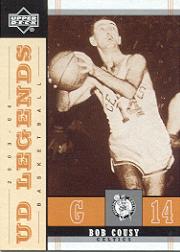 Bob Cousy's sleight-of-hand routines earned him nicknames like "The Houdini of the Hardwood." See more pictures of basketball.

Bob Cousy, the point guard for the Boston Celtics from 1950-63, was the definitive playmaker in the formative years of the NBA. Moreover, in the era before Bill Russell and Wilt Chamberlain, he was widely hailed as the best player in the history of the game.

As a collegian, Cousy was an All-American and helped Holy Cross to the NCAA championship in 1947. After turning pro, he guided the Celtics to six NBA titles, including five in a row from 1959-63, and earned first-team All-NBA honors 10 consecutive seasons. He was named the league's Most Valuable Player in 1957. His career averages: 18.4 points and 7.5 assists per game.

Cousy had no peers when it came to ball-handling and passing. He was solidly built at 6'1" and 185 pounds. He had big palms and long fingers to manipulate the ball, and he was blessed with extraordinary peripheral vision, affording him a 180-degree field of view. He had uncanny instincts for seeing the open man and finding him with a pass. And he was smart too. During his days with the Celtics, he headed the NBA Players Association, which he helped form in the mid-1950s.

Cousy's signature was the behind-the-back dribble, a tricky maneuver that forced defenders onto their heels and enabled Cousy to change direction instantly. The behind-the-back was not something he worked on as a kid. Rather, he discovered it accidentally in a game against Loyola of Chicago. Driving to the basket for the potential game-winning shot, Cousy saw his path cut off. Suddenly, he went behind his back with his dribble, found the ball with his left hand, and laid it in. Like everybody else in the arena, he was stunned.

A few years later, the move had become part of his repertoire, along with other Cousy originals like the twice-around pass, the backward pass, the behind-the-back transfer, and the pass off the dribble. His sleight-of-hand routines earned him nicknames like "The Mobile Magician" and "The Houdini of the Hardwood." To others, he was simply "The Cooz."

Cousy was born in New York City on August 9, 1928, a few weeks after his parents had emigrated from France. An only child, he took quickly to sports, and at age 14 he gave up baseball to concentrate on basketball. He didn't make his high school team as a freshman or sophomore, but he was All-New York City as a senior. He chose Holy Cross over Dartmouth and Boston College. In four seasons of college ball, he averaged 15.2 points per game.

Good as Cousy was in college, the fledgling NBA viewed him with skepticism. The Tri-Cities Blackhawks selected him in the 1950 draft, then traded him to the Chicago Stags for forward Gene Vance. However, the Stags folded before Cousy could play a game, and their players were assigned to other teams through a dispersal draft. There was scant interest in Cousy, and eventually his name was tossed into a hat along with those of veterans Max Zaslofsky and Andy Phillip. The Celtics drew Cousy.

Boston's blind luck was apparent when Cousy finished ninth in the league in scoring. However, it wasn't until his second season, after Celtics coach Red Auerbach spruced up his offense to include more fastbreaks, that Cousy became a dominant player. At first, Auerbach resisted what he felt were Cousy's stylish excesses, but in later years Red would insist that Cousy was the greatest playmaker who ever lived.

Though Cousy was an All-Star every year, Boston did not win the championship until 1956-57, Cousy's seventh season. Cousy was spectacular that year, leading the NBA with 7.5 assists per game and ranking eighth in scoring at 20.6 points per game. He was selected as the league's Most Valuable Player in a vote of his peers. The Celtics defeated the St. Louis Hawks in seven games for the title, and few remember that Cousy made just two of his 20 field-goal attempts in the decisive game.

The Celtics were nearly invincible in the late 1950s. Cousy quarterbacked a lineup that included Bill Russell at center; Tom Heinsohn, "Jungle Jim" Loscutoff, and Frank Ramsey at forward; and Bill Sharman, K.C. Jones, and Sam Jones at guard. It was Cousy's job to keep everybody happy and productive. One year, six different Celtics averaged at least 15 points per game, while Cousy led the NBA in assists for eight consecutive seasons. On February 27, 1959, Cousy had 28 assists against the Minneapolis Lakers, an NBA record that stood until 1978.

Cousy considered retirement as early as 1958 but played until 1963. An activist for the players, he railed against the way the NBA did business. He deplored the long seasons, the travel, the incessant injuries, and time spent apart from his wife and two daughters. Away from basketball, he championed the civil rights movement, joined the NAACP, and served as a Big Brother to African-American children in Boston.

Tears flowed freely when Bob Cousy Day was held at Boston Garden the last day of the 1963 season. The Celtics went on to defeat the Lakers in the NBA Finals that year. Cousy's last game ended with him at midcourt, protecting the ball with his dribble as the final seconds ticked off the clock.

Cousy slipped into retirement but never left the game. In six seasons as the head coach at Boston College, he compiled a 117-38 record and went to the postseason five times. When he tired of the recruiting grind, he returned to the NBA in 1969 as coach of the Cincinnati Royals, even playing briefly in seven games in a desperate attempt to pump up the gate. He left coaching in 1973 and has broadcast Celtics games since 1974. He was elected to the Hall of Fame in 1970.

Prior to March 22, 1953, the Boston Celtics had never won a playoff series. But thanks to Cousy, that changed when the Celtics defeated Syracuse 111-105 in quadruple overtime to clinch the opening playoff series. Cousy poured in 50 points, setting an NBA playoff record.

Thirty of Cousy's points came at the line (in 32 attempts), as Boston capitalized on 55 Syracuse fouls. He was also heroic down the stretch, sending the game into a fourth O.T. with a long one-hander five seconds before the buzzer. With Boston down 104-99 in the fourth O.T., Cousy sank a foul shot, two field goals, and four more free throws to seal the deal.