Is board-breaking a good idea? 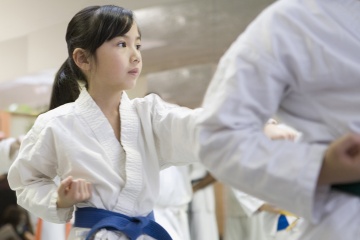 Is it worth it to teach our children how to break boards in karate class?
Spencer Jones/Photographer’s Choice/Getty Images

One ostensible reason for the promotion of board-breaking as an aspect of martial arts training is that it allows instructors to evaluate students' progress in a safe, controlled manner rather than throwing them into the ring with an opponent. But not everyone agrees with this. In fact, some instructors are vehemently opposed to board-breaking for a whole range of reasons.

One argument is that it's dangerous, especially for children. The human hand is an incredibly complex body part with 27 small bones, which allow for astonishing dexterity. Capable of phenomenally complex tasks like playing a violin, performing open-heart surgery or knitting miniature sweaters, the hand, skeptics argue, is not something we should fling repeatedly against hard objects. It's a body part we should safeguard for the future.

Another objection to board-breaking (which often starts at the beginner level) is that it teaches children an unfortunate lesson: namely that performing meaningless stunts is praiseworthy. Ultimately, they say, board-breaking is useless in the real world. As the legendary Bruce Lee is supposed to have said, "Boards don't hit back." The point of martial arts isn't to be able to bust up a stack of pine, it's to be able to defend yourself from physical assault. To achieve that end, students should focus on enhancing their agility, speed, conditioning and technique.

Board-breaking skeptics argue that the real reason martial arts instructors like to use board-breaking isn't as a gauge of progress but rather as a visually impressive promotional stunt to attract more students [source: Salick].

No doubt some of these objections are valid. But the most compelling argument, that board-breaking is injurious, is hard to prove. While it's difficult to find statistics specifically related to board-breaking, numerous studies have been conducted on the safety of martial arts training. They all seem to indicate that while some practitioners do get hurt sometimes, the bulk of the injuries are minor bruises and cuts. Martial arts, according to the studies, are relatively safe, particularly karate [source: Zetaruk]. And since tameshiwari is such a common feature of karate training, it seems probable that breaking boards is pretty safe, too — as long as you practice and prepare.

Author's Note: How Board Breaking Works

Having only taken aikido, which emphasizes handholds rather than strikes, I've never broken a board with my bare hands. But maybe I'll take it up as a hobby (after having received proper instruction and training, of course!). I can see the cathartic appeal of it. Apparently some people like to prep their boards by baking them in the oven for a while. I think that'll be my approach as well — assemble a stack of boards, bake them until they're ready to snap in two if handled roughly and then karate chop one after the other until I've got enough kindling to start a fire in the woodstove.