Why chop wood with bare hands when we have axes for that? 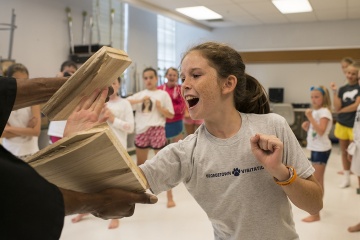 In 2014, Maeve Murray, 11 at the time, was able to break two wooden boards in the karate class at Girls Up, a summer camp founded by her mother.
Yue Wu/The Washington Post via Getty Images

Say a person has been training in a martial arts technique for some time and is reaching a level of high proficiency. We'll call her Jane. Say Jane leaves the training studio one day after practice and heads home. But when she turns a corner, a bunch of thugs jump her.

Thanks to her training, Jane's muscles react instinctively before she has time to be scared. She twists out of the grasp of Thug 1 and spins, landing a devastating kick on the side of his knee, which bends inward with a sickening crunch as he collapses. Thug 2 charges. Instead of running, Jane engages, closing the distance between them as she slips sideways and up, redirecting his attack with her shoulder and simultaneously breaking his nose with her elbow.

Thug 1 can't walk and Thug 2 is on the ground covered in the blood gushing from his nose. Both are screaming with pain. As Jane stands over her vanquished foes, adrenaline surging through her, she hears applause. Her teacher emerges from the shadows and confers a black belt on her as other students cart away the bloodied and broken "thugs."

Needless to say, the above is total fiction. Yet, the scenario described is exactly the sort of thing martial arts training is designed to help people face, and staging an unexpected attack on a student would, in some ways, be an ideal way to test her level of competence. However, as we can see, such a testing methodology has some inherent flaws (e.g., potential long-term damage to body parts). Aside from liability issues, it might be hard to find "thugs" willing to sign up for a certain mangling. And, of course, it's always possible a student will crack under real-world testing and end up maimed or worse — not exactly the kind of publicity a dojo wants.

To avoid such scenarios, a number of the martial arts developed a testing regime that includes board-breaking. Seen in this light, it makes perfect sense. Instead of hurting somebody else, hurt some lumber!

When training a beginner to break a board, a teacher focuses on helping his students to conquer their instinctive aversion to self-inflicted harm. Whacking a board as hard as we can with our bare hands just doesn't come naturally. And our fear of hurting ourselves in doing so is entirely justified. To break a board without breaking your hand, you have to do it just right, focusing your energy and hitting with enough force and follow-through (more on this later). Luckily, it turns out that even the tiny bones in your hand can handle a lot of stress — 40 times more than concrete, believe it or not [source: Newton's Apple].

Once students have mastered this initial phase, they can move on to the intermediate level in which they begin to increase the quantity of stuff they can break. The more they're expected to break, the more force and focus they require to accomplish their goal. Teachers must be vigilant during this phase as overconfident students can really injure their hands.

From there it's a matter of students continuing to train their energy and focus until they can break a giant stack of concrete blocks with a single blow. That's not a joke. People actually do that. In fact, board-breaking has taken on a life of its own, and there are now international competitions where adepts demonstrate astounding feats of concentration and power [source: Serrano].

But how do they do it?