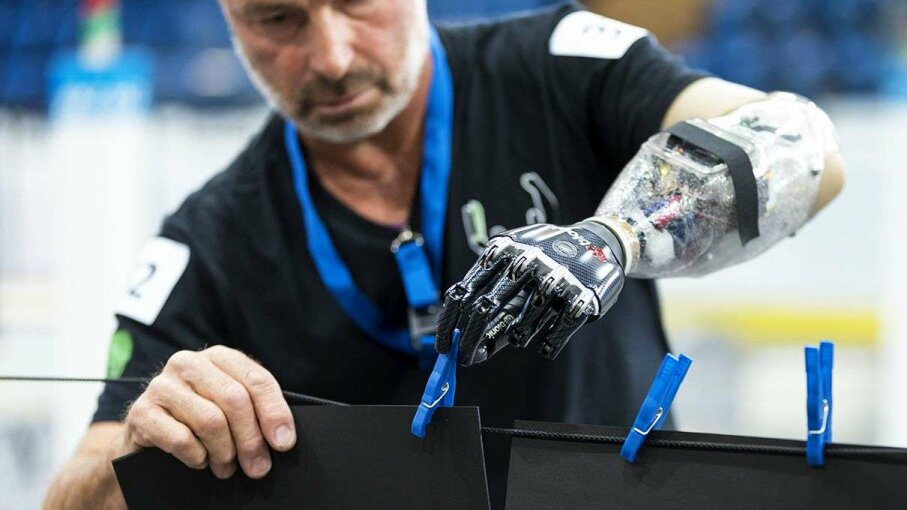 Cybathlon 2016, an Olympic-style competition to advance assistive devices, will be held in Switzerland on October 8. Alessandro Della Bella/ETH Zurich

According to the World Health Organization, about 15 percent of the world's population copes with some sort of physical disability, ranging from missing or paralyzed limbs to neuromuscular disorders such as cerebral palsy. And about 2 to 4 percent of humans are so seriously impaired that they have difficulty functioning.

That's a situation that researchers such as Robert Reiner, a robotics professor at the Swiss university ETH Zurich, believe can be remedied. They look to advances such as high-tech biomechatronic prosthetic limbs, electronic implants to activate muscles, and brain-computer interfaces that could allow a paralyzed person to control a powered exoskeleton with his or her thoughts.

The Virtual Brain-Computer Interface (BCI) race involves detecting and then converting brainwaves into control signals, allowing contestants to use their thoughts to control an avatar in a computer game.
Alessandro Della Bella/ETH Zurich

In order to promote such futuristic technologies and improve the lives of disabled people, Reiner dreamed up a novel international competition. The first-ever Cybathlon, will be held in Zurich, Switzerland, on October 8. It differs from the Paralympics, where disabled athletes compete at sports ranging from rugby to curling using only their muscles, without any sort of powered assistance.

The Cybathlon, in contrast, will feature teams composed of researchers and disabled people utilizing various high-tech gadgets. The teams will vie to see whose inventions perform better at tests such as a bike race in which paraplegic competitors' leg muscles are contracted by electrical stimulation.

The 80 teams expected to compete at the Cybathlon hail from countries ranging from Iceland to South Korea. One of the competitors in that bike race is Team Cleveland, a partnership of researchers at institutions such as Kent State and Case Western Reserve universities, the Cleveland Clinic and the Louis Stokes Cleveland Veterans Administration (VA) Medical Center.

The team's "pilot" — the word Cybathlon uses for athlete — is Michael McClellan, a California man whose spinal cord was damaged in a dirt bike accident, preventing it from transmitting signals to his legs. But as this video below shows, McClellan can now pedal a recumbent bicycle, thanks to electrodes that stimulate his leg muscles.

But the technology that McClellan uses is different from previous electrical stimulation methods, in which electrodes were applied to a user's skin and provided only faint stimulation.

"The device is an implanted neural stimulator, like a pacemaker for the paralyzed muscles," says Ronald J. Triolo, a Case Western Reserve professor who directs the VA's Advanced Platform Technology Center, an assistive technology lab.

"Stimulating electrodes are wrapped around or inserted close to the nerves of the major muscles of the legs and hips of volunteers paralyzed by spinal cord injuries," he explains, "and connected to the implanted pulse generator. The implant delivers tiny electrical currents to the nerves which then cause the muscles to contract. An external transmitter communicates to the implant to tell it which muscle to activate when and how hard to contract."

Triolo says the technology can be used to coordinate a number of different muscles to get various movements out of the entire leg — not just pedaling a bike, but standing, stepping or other types of exercise as well. The user selects the desired movement pattern from a menu of options with a wireless ring-mounted finger switch.

But whether Team Cleveland outshines its competition, Triolo says that the real goal is to shine a light on the needs of people with disabilities, highlighting how technology can enable them to be more independent and productive.

Now That's Interesting
It took 11 hours of surgery to implant Triolo's apparatus in McClellan's body. The equipment included eight electrodes in his gluteal muscles and hamstrings, and cuffs around each of his two femoral nerves that allow control of muscle fibers in his quadriceps. Six months of recuperation were necessary before the device could even be turned on for testing.