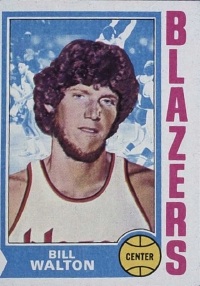 Bill Walton is considered to be one of the most versatile centers of all time. See more pictures of basketball.

From the top of his ankles to the crest of his flowing red locks, Bill Walton had everything a basketball player could want. He was, in the opinion of many, the most versatile center of all time. His college coach, John Wooden, said that Walton was better than Kareem Abdul-Jabbar in shooting, rebounding, and the ability to inspire others to greatness.

But because he had high arches and brittle joints, Walton was always one step away from a serious foot injury. After joining the professional ranks in 1974, he underwent numerous surgeries, costing him four full seasons and parts of three others. When he retired in 1988 after 14 years with three NBA teams, he had missed more games than he had played. His career consisted of 468 games, during which he averaged 13.3 points and 10.5 rebounds. Yet because he was so good when his body was willing, he was elected to the Hall of Fame in 1993.

Walton insisted on being listed at 6'11" for fear of being labeled a freak, but a 1986 Boston Celtics team photo shows him standing taller than Robert Parish, who measures a precise 7'1/2". Despite his size, Walton's game was based on quickness, emotion, teamwork, and clever passing. He was a remarkable weapon, sweeping the boards and creating fastbreak opportunities with his outlet passes. He led the NBA in rebounding and shot-blocking one season, and he remains the most accurate shooter in NCAA Tournament history.

Away from basketball, Walton championed radical causes, followed a vegetarian diet, opposed the war in Vietnam, and became a fanatical follower of the rock band The Grateful Dead. Drafted by the Portland Trail Blazers in 1974, he immediately lapsed into a two-year slump because of injuries. Angry Portland fans, wrote Sports Illustrated's Curry Kirkpatrick in 1976, considered Walton "a doped-up, whacked-out, weirdo, Commie-loving, acid-freak hippie with lice in his hair and Patty Hearst's phone number in his date book." He was none of the above, and when his career ended, he slipped smoothly into the mainstream, earning critical praise as a broadcaster.

Born November 5, 1952, in La Mesa, California, Walton had varied childhood interests, including music and football. His older brother Bruce played in the NFL; Bill chose basketball after spurting from 6'1" to 6'7" between his sophomore and junior years at Helix High School. As a senior, he led Helix to a 33-0 record, averaging 29 points and 24 rebounds. The next season, he drove UCLA's freshman team to a 20-0 mark. Next came back-to-back 30-0 seasons with the varsity, culminating in NCAA championship-game victories over Florida State in 1972 and Memphis State in 1973. In all, Walton went five years and 142 games between losses, until a 71-70 setback at Notre Dame his senior season. The college Player of the Year for three consecutive seasons, he graduated as UCLA's all-time leading rebounder and second-leading scorer.

Though pursued by the American Basketball Association, Walton signed with Portland, with stipulations that no one could make him get a haircut or talk to the press. In his first two seasons, he suffered a sprained ankle, broke his left wrist twice, and dislocated two toes and two fingers. For the 1976-77 season, the Blazers hired Jack Ramsay as coach, retooled their roster with role-players such as Maurice Lucas and Dave Twardzik, and finally had Walton healthy for most of the season. Facing Julius Erving and the Philadelphia 76ers in the NBA Finals, the Blazers lost the first two games before winning four straight to capture the only championship in franchise history.

Disaster struck in 1978. Walton won the NBA Most Valuable Player Award but suffered a late-season foot injury, knocking him from the postseason. Unable to play, he was traded to the San Diego Clippers in 1979. Later, he played with the Celtics, winning a championship and the NBA Sixth Man Award in 1985-86. It was the only season in which he played more than 67 games.

Walton was a center who could score and rebound, but what made him extra special were his intangibles--passing, hustle, and championship-style leadership. His record at UCLA: 86-4.

Bill Walton's Greatest Game The 1972-73 "Walton Gang" at UCLA was one of the greatest teams of all time, and in the 1973 NCAA championship game against Memphis State, Walton played the closest thing to a perfect game in tournament history. Defended at the start by Tigers forward Larry Kenon, and later by a zone defense, Walton missed only one of his 22 field-goal attempts en route to 44 points, the most ever scored in the championship game. His shooting percentage (.955) is the best in tournament history for players with at least 10 attempts. UCLA pulled away from a halftime tie to win 87-66. In addition to his 44 points, Walton had a game-high 13 rebounds.