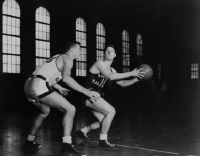 Born May 25, 1926, in Abilene, Texas, Sharman attended high school in Porterville, California, then became a star athlete at the University of Southern California. He began his pro career as an outfielder in the Brooklyn Dodgers system in 1950, toiling five seasons in baseball's minor leagues while doubling as a pro basketball player in the winter.

After his first NBA team, the Washington Capitols, folded midway through his rookie season, Sharman's rights passed to the Fort Wayne Pistons in a dispersal draft, then to Boston in a trade. Once settled with the Celtics, the 6'10" Sharman quickly worked his way into the lineup alongside Bob Cousy.

Sharman's specialty was a quick-release, one-handed shot that was close to automatic. He kept himself in peak condition by adhering to a daily regimen of stretching, exercise, and practice. A stickler for details, he kept notes on the tendencies of opposing players. He also competed fiercely, never backing down from a fight.

Sharman played 10 seasons with Boston, averaging 17.8 points and leading the NBA in free-throw shooting seven times. Wilt Chamberlain called him "a near-perfect guard who might have been the greatest shooter of all time."

Overall, he coached 13 years in the college and professional ranks. He was named to the NBA's Silver Anniversary Team in 1970 and elected to the Hall of Fame five years later as a player. He was elected to the Hall as a coach in 2004, making him only one of three people (the others being John Wooden and Lenny Wilkens) to bestow that honor.