by the Editors of Publications International, Ltd. Aug 8, 2007 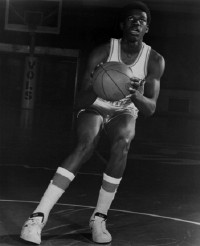 ©University of Tennessee Athletics Bernard King was named Comeback Player of the Year after averaging more pictures of basketball.

Bernard King isn't so much a basketball legend as he is a basketball player who was capable of legendary performances. A high-scoring forward in the NBA from 1977-1993, King became the first player since 1964 to score 50 points on back-to-back nights, and -- he is proud to tell -- the only player to play in an All-Star Game without an anterior cruciate ligament.

King's career nearly ended in 1985, when he suffered an injury to his right knee that was so bad that his ACL had to be replaced with ligaments from his upper thigh. Away from the game for more than two years, he returned with two goals: to score 50 points in a game again and to regain his status as an All-Star. He accomplished both, then suffered more damage to the knee in 1991. He drifted away from the game two years later, 345 points shy of 20,000.

At his peak, the 6'7" King was one of the game's most dominant players. The New York Times described him as "a machine-like post up scorer with a rapid-fire release that made his shot almost impossible to block."

As good as King was, his exit generated little fanfare. He had problems with alcohol as well as legal troubles in college and early in his pro career. He eventually worked his way out of three organizations and into a rehab clinic before landing with the New York Knicks in 1982. Later, he had a bitter falling-out with the Washington Bullets. Finally, he was released by the New Jersey Nets, the franchise that drafted him in 1977.

King was born December 4, 1956, in Brooklyn. At the University of Tennessee, he led the Volunteers to two NCAA Tournament appearances. The seventh pick in the 1977 draft, King averaged 22.8 points in two seasons with the Nets, then was traded to Utah, where he foundered.

Passed on to Golden State after undergoing treatment for substance abuse, he became the NBA's Comeback Player of the Year in 1980-1981. King scored 60 points with the Knicks in 1984-1985, the same year he averaged 32.9 points per game.