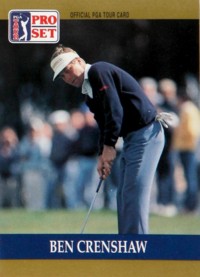 Ben Crenshaw came out of the University of Texas in 1973 with a long swing, a silky putting stroke, and an amateur portfolio that stamped him as the game's next great star.

In the late 1990s, Crenshaw's swing became considerably shorter, and he compiled an outstanding record as a professional while falling a bit short of the lofty peaks predicted of him. One thing remained the same: his sweet putting stroke.

Indeed, Crenshaw will go down in history as one of the greatest putters in the game. Thus, it is perhaps no surprise that his two major titles have come in the Masters at Augusta Nati­onal, where putting is paramount.

In fact, in addition to winning the Masters in 1984 and 1995, he has two seconds, two­ thirds, and two fourths there.

Crenshaw grew up in Austin, Texas, and stayed in town to play for the Longhorns, winning an unprecedented three consecutive NCAA Championships in 1971, 1972, and 1973 (sharing the second with teammate Tom Kite).

He seemed ready to take the world by storm when, in the fall of 1973, he won his first event as a member of the PGA Tour, the San Antonio-Texas Open.

Crenshaw was plagued by wildness off the tee, however, and didn't post his next win until 1976. He claimed three victories that year and finished second on the money list; both would remain career highs.

Though he has been plagued by inconsistency throughout his career, Crenshaw had 19 victories through 1996 and had finished among the top 10 money winners seven times.

More than any other player, Crenshaw loves and respects the game's history, so the major championships are especially important to him.

Finally, he broke through at the 1984 Masters. Crenshaw's win at the 1995 Masters was also an emotional one, coming a week after the death of his longtime teacher, Harvey Penick.

Who built the first miniature golf course?
How Golf Clubs Work
What is the world's longest golf course?