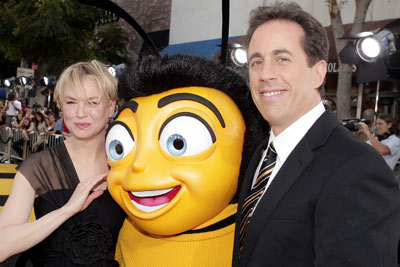 Supervising animator Marek Kochout, who supervised a group of 40 animators (seven to 10 of them worked on a given sequence at any one time), outlines the character development process. "Once a character's design is approved, it's given to the modeling department, and they make a 3-D model that goes through more changes," he says. "Then it's given to the rigging department, which puts the CG equivalent of a skeleton and muscles inside of it." The rigging department decides how the model moves and tests it repeatedly.

Meanwhile, the sequences are storyboarded and timed out, so the crew knows what the shots will look like. The layout department works out the shots and sets camera angles. Then the animators block out the shot, get feedback from the directors and shoot the sequence.

Next, the lighting and effects department finalize color and add elements like smoke and explosions. "Once everyone is happy with it, the editors snip away a frame here and there and get the sequence put together," Kochout says. When it's all put together, the composer adds the music.

Kochout, who worked on "Over the Hedge," "Shrek 2," and "Madagascar," says that recent technological developments made his job on "Bee Movie" a bit easier. "It's a combination of both hardware and software," he says. "The machines -- really fast dual-processor computers with bigger displays -- allow us to do our work a little quicker. And the software is a little smarter."

Seinfeld had no agenda for "Bee Movie" other than to make a funny movie and put his personal stamp on CG animation, but now that it's done, the family man in him -- he's the father of three -- is "really excited about it as a gift to children," his own in particular. But in typical neurotic fashion, he has one concern: "I hope they don't go up to bees after this. What I'm worried about is a lot of kids seeing bees after the movie and trying to go pet them."

While he admittedly didn't think much about bees before, Seinfeld says his opinion of them has changed "enormously" as a result of making the movie. "I have much more respect for them now," he says.

After a labor of love like "Bee Movie," Seinfeld is in no rush to make another animated film. "It was a very big investment of time and energy," he says. "I tend to like to try new things -- that's what attracted me to this. I'll probably try to do something different again after this. But my real profession is to be a comedian. These other things that come along are great experiences, but I don't really feel like it's my real job. My real job is telling jokes in front of an audience. Starting the beginning of next year I'll be doing more stand-­up."