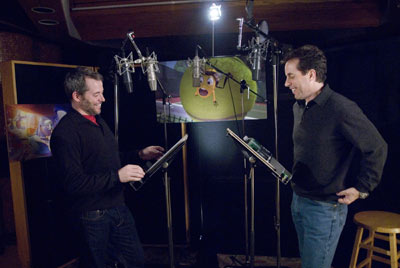 Directors Simon J. Smith and Steve Hickner, who worked together on the Universal Studios attraction "Shrek 4-D," came to the project in July 2004 and hit it off with Seinfeld from the start. "He's not precious about where ideas come from, and we had some great banter with him," Smith says. "There's a very high standard he brought that he wanted to keep. The great thing about Jerry being the writer and producer and starring in it was that we could develop things very quickly. We could rewrite something in an afternoon that would normally take six weeks."

Having Seinfeld hands-on and present -- he often telecommuted from New York -- proved invaluable, especially in the recording studio. For the other actors, "having a performer who was bringing his A game brought everyone's level up, and they'd be bouncing off each other," Smith says. "You'd get the kind of performance you'd normally get on a set. The first six months was a learning curve for Jerry, but then he could just turn Barry on at the flick of a switch, and that made everybody go up a level."

Barry's Seinfeldian appearance and personality evolved organically, Smith says. "We shoot reference footage when we record the voices, and it came to a point where you started seeing Jerry in Barry -- it's just the way the character evolved. As Jerry started getting into the character, Jerry became Barry, and the animators helped coalesce the performance with the image."

Appropriately dressed in black and yellow, Barry is neither realistic nor completely stylized. "We wanted the design of the characters to be somewhere in the middle," Smith says. It took upward of 800 designs to finalize his look. Renée Zellweger's florist character, Vanessa, posed different problems -- according to Smith, female faces and forms are difficult to reproduce. But it was placing the tiny bee and human Vanessa in the same universe that proved trickiest of all.

"Choreographing those scenes was one of the biggest challenges. You want a relationship to flourish and have intimacy, but you can't have a two-shot. And you have to establish the relationship without having weird camera angles."

Scale problems also came into play in the design of the environments in the film. "You have two full worlds, the human world and the hive world, and each had to have enough detail to balance each other out," Smith says. Merging those worlds when bees venture outside the hive multiplied the difficulty factor.

"The bees are so close to the camera lens and they're flying through human space at 200 miles an hour, so to get the compositions right and adjusting the camera was very difficult," Smith says. "There's one shot where you see the whole reverse of Central Park with bees flying through the kites. That sequence took nine months."

On the next page, the movie's animation supervisor will tell us more about why that sequence took so long.

Jerry Seinfeld created several live-action promotional trailers for "Bee Movie" that sought to illustrate, via comic mishaps and chaos, why it worked better as an animated film. "I thought, 'What if you were so dumb that you tried to make it for real? How bad would that be?'" he says. "So we did this funny story of how we ended up making it a cartoon." Seinfeld looks particularly ridiculous in a giant bee costume, as does Chris Rock as a huge mosquito, enduring water torture together on a giant windshield. Seinfeld says he owes Rock big-time for the favor: "I don't know how I'm going to pay him back."