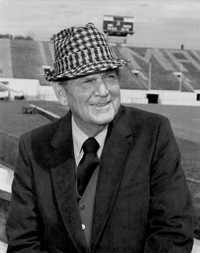 Paul "Bear" Bryant was one of college See more

Paul Bryant began his college football career as the "other" end to Don Hutson on the University of Alabama’s 1935 Rose Bowl team.

Don Hutson went on to become one of pro football's all-time stars, but Bryant, though drafted by the NFL in 1936, opted to become an assistant coach at his alma mater. It was a decision that would eventually lead him to an eminence in college football even greater than what Hutson achieved among the pros.

In 1940, Bryant (1913-1983) took a position as assistant to Henry "Red" Sanders at Vanderbilt, but after two years he left to serve in the Navy during World War II. He received his first chance as a head coach at the University of Maryland in 1945, where he compiled a 6-3-1 record.

The following year, he moved on to the University of Kentucky. Over the next eight seasons, he took the Wildcats to a 60-23-5 record and victories in three bowl games.

Among the All-American players he developed were quarterback Babe Parilli and tackle Bob Gain. Bryant coached from 1954-57 at Texas A&M, where he developed back John David Crow into a Heisman Trophy winner. His 25-14-2 record included the 1956 SWC championship.

Bryant was named the national Coach of the Year three times, and when he retired, his 323 career victories were the most ever achieved by a college coach up to that time. Only Grambling's Eddie Robinson has since surpassed that mark.

Nicknamed "Bear," Bryant was a large, powerful man with a growling voice and a gruff manner. Although he was a strict disciplinarian, he also earned his players' deep loyalty by taking a concerned interest in their lives.

10 Tips for Hosting a Fantasy Football Draft
How do retractable roofs in convertible stadiums work?
How the NFL Draft Works