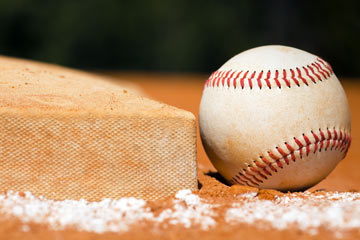 A ground ball is usually called fair or foul based on whether it stops rolling inside or outside the foul line. See more sports pictures.
Hemera/Thinkstock

"Almost" only counts in horseshoes and hand grenades. Nowhere is this universal truth of sporting life more clear than between the white lines of a baseball diamond, where an inch here and there can mean the difference between a win and a loss. At the professional level, some of farthest hit balls - including mammoth, towering shots that land deep in the seats where you need binoculars to see the action on the field -- are completely meaningless. That's because they fly into the stands on the wrong side of the foul poles.

In order to be able to try to reach base on a hit -- or for one of those blasts into the cheap seats to count as a home run -- the ball must be hit in fair territory, the part of the playing field within, and including the first base and third base lines, from home plate to the outfield fence and perpendicularly upwards (typically marked by yellow foul poles). A ball hit anywhere else is a foul ball, which counts as a strike for the hitter (unless he already has two strikes; in that case a strike is not recorded) and runners must return to their original bases [source: Booth].

The job of determining whether a ball is fair or foul falls to the umpire or crew of umpires, those deep-voiced, navy-chest-guard-wearing individuals who call balls and strikes and generally maintain order on the playing field. How the boys in blue come down on a particular fair/foul call depends largely on whether the ball is hit in the air or on the ground [source: Booth].

A ground ball is generally called fair or foul based on where the ball stops rolling or is scooped up by a fielder: If it's outside the foul line, it's foul; if it's on or inside the foul line, it's fair. If the ball rolls untouched past first or third base, the call is made based on where the ball was when it passed the base [source: Major League Baseball].

For example, when a bunted ball rolls down the third base line teetering on both sides of the line, the third baseman may avoid picking the ball up, hoping that it will come to a stop or continue past the base in foul territory.

A fly ball hit into the stands, whether traveling by the speed of light into the far corners of a stadium or just inching over the fence, is a different breed for fair/foul purposes. Here, the question is whether the ball was inside the foul poles when it passed into the stands, not when it ultimately lands. A ball that hits the pole is in play [source: Major League Baseball].

Hence the baseball version of a rain dance: a player who hits a long fly ball straddling the foul line will often try to "will" it into fair territory with an array of body English, odd contortions meant to somehow carry the ball in the right direction from more than 350 feet away. It doesn't work.

Add me to the list of those who say hitting a baseball is the hardest thing to do in sport. Sadly, I just. Can't. Do it. I'm not talking about laying a bat on one of Stephen Strasburg's 98 mile an hour fastballs, a Mo Rivera cutter or whatever that knuckle-y thing that R.J. Dickey throws. I'm talking about a nice, fat melon looping out of a machine at a cool 60 m.p.h. And that's just putting the bat on the ball. Hitting it into fair territory? Let's just say I like to color outside the lines.