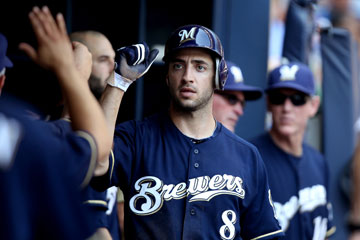 Ryan Braun of the Milwaukee Brewers challenged the results of a drug test and was able to overturn his suspension.
Mike McGinnis/Getty Images

Under a 2005 agreement between MLB and the players' union, every player is now tested twice during each baseball season, and in addition there are an unlimited number of random tests. The actual testing regimen -- scheduling the tests, supervision of the sample collection, to transportation of samples to a lab certified by the World Anti-Doping Association, oversight of the lab work, and reporting of positives to the MLB and players' union -- is handled by Independent Program Administrator [source: MLBplayers.mlb.com].

The MLB also bans amphetamines and amphetamine-like stimulants, but doesn't go after them with quite the same rigor as steroids, possibly because the latter have done more damage to the sport's reputation. Players aren't subjected to mandatory annual tests, but the IPA still has sweeping power to test anybody, anytime, without needing prior evidence of a possible violation [source: MLBplayers.mlb.com].

While hardly anyone argues with the justification for drug testing anymore, there's plenty of criticism of how baseball actually does the testing. Rather than turn the process over to a completely separate organization, as the International Olympic Committee does, MLB sends its own staff to the ballpark to handle and transport urine and blood samples. A brouhaha involving Milwaukee Brewers player Ryan Braun, the reigning National League MVP, highlighted these problems. After a staffer collected Braun's urine sample in October 2011, he reportedly took it home with him and stored it in his refrigerator before shipping it to a laboratory. After the test came back positive, Braun was able to get his automatic 50-day suspension overturned by an arbitrator in February 2012, on the basis that the long delay had compromised the results. It was the first time that baseball's drug testing system had been challenged successfully, and it may have opened the door for other players to contest the process as well [source: Belson and Schmidt].