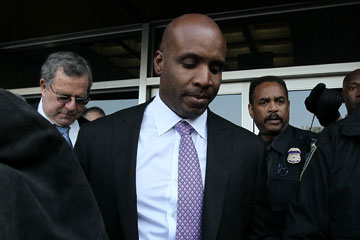 On April 13, 2011, former Major League Baseball player Barry Bonds was found guilty of obstruction of justice for lying about his use of performance-enhancing drugs.
Justin Sullivan/Getty Images

As growing revelations of performance-enhancing drug use battered baseball's public image in the early 2000s, MLB commissioner Bud Selig had little power to do much about the problem. Though athletes' use of steroids was already banned by federal law, MLB's labor agreement only allowed drug testing when officials had strong evidence that a player was dirty. But finally, in August 2002, Selig and the players' union worked out a deal to create the Joint Drug Prevention and Treatment Program. In the following 2003 season, players arriving at spring training were for the first time subjected to "survey" testing to determine the extent of illicit drug use. Violators weren't punished, but the results were disturbing: Five to seven percent of 1,438 tests were positive. Armed with hard evidence that detection and enforcement was necessary, baseball officials set in motion mandatory random testing for the 2004 season, with possible penalties attached [source: MLB.com].

With a few modifications, such as stiffer penalties, that basic system has been in place ever since. Every player is tested during spring training, and once the season begins, additional unannounced tests are conducted of randomly selected players. Both urine and blood samples are taken, since various drugs show up in different places. Players also can be selected for testing if teams or MLB learns of evidence they may be using banned substances [source: MLBplayers.mlb.com].

Unlike players caught using recreational drugs like cocaine or Ecstasy, who are diverted into a confidential treatment program and allowed to keep drawing their salaries, athletes caught using most performance-enhancing drugs are hit immediately with tough penalties. A first offense earns them a 50-game suspension without pay, and a second bite of the apple puts them in civilian clothes for 100 games. A three-time loser gets a "permanent" suspension, which in baseball means he can apply to the commissioner for reinstatement after two seasons. Use of illegal stimulants like ephedra get lesser penalties -- a warning and follow-up testing for a first offense, a 25-game penalty for a second infraction, 80 games for a third failed test, and ultimately, indefinite suspension for a fourth offense [source: MLBplayers.mlb.com].